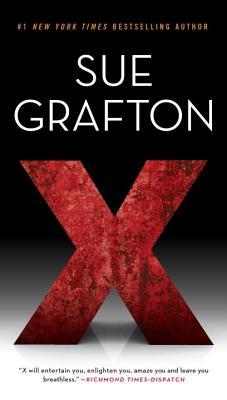 It’s 1989 and series PI Kinsey Millhone works on three cases alongside each other, all of them pro bono, and in so doing discovers that an opinion she’s held about someone for years was in fact misplaced.

The most significant of the three cases concerns a man who has obviously behaved appallingly throughout his life and who, as Kinsey teases out more evidence, seems to have been — still indeed be — a serial killer. Then there’s the matter of a divorcing wife who wants, as one last piece of revenge, to swipe from under her husband’s nose the Turner painting he doesn’t realize he owns. And finally there’s the problem of Kinsey’s new neighbors, who seem to be something other than what they’d like the world to believe they are.

Of course, we expect that eventually Kinsey will discover the three cases are actually linked, but this doesn’t happen: the book’s three plotlines remain resolutely unconnected except insofar as Kinsey’s busily investigating them all at the same time.

This could a quite refreshing change from the normal, Chandleresque pattern of PI novels were it not for the fact that what are in effect three independent stories are all individually unsatisfying: one remains essentially unresolved by book’s end; one doesn’t seem to hold water as a plot in that it involves an implausibly baroque (and expensive!) scheme to accomplish something that could be achieved just as effectively the simple way (why on earth would the peeved divorcee go to all the trouble and expense of conning Kinsey into tracking down a particular jailbird to recruit for her little heist rather than simply employ someone closer to hand?); and one is trivial.

The trivial case does resolve, but the resolution left a rather nasty taste in my mouth — as did various other secondary aspects of the book. Kinsey, whom I’ve always liked, here seems a bit of a sourpuss, sporting some attitudes that I’m not so sure I respect. Moreover, Kinsey’s (i.e., Grafton’s) writing style seems to have devolved a bit. Her sentence construction in places becomes simplistic to the point that it irritates, and there are far too many passages where we’re told that (say) Kinsey opened a door by turning the key in the lock, then turned the handle and pushed inward, then entered the house by stepping over the threshold, then put on the light by use of the light-switch . . . passages of overt padding, in other words, filled with tediously and wholly unnecessarily detailed description of everyday acts.

And don’t get me started on all the stuff about Kinsey’s landlord and best friend Henry’s stratagems to rejig his plumbing in order to cope with the drought currently (1989) raging in California. (Plus ca change, eh?) Plumbing and water conservation are vital issues, make no mistake, but a detective novel is perhaps not the place to be, er, extensively infodumping on the subject.

Looking at the dates, Grafton must have been already in the thrall of her final illness when she was writing this novel, and absolutely we should cut her some slack accordingly: it’s hard to imagine the emotional conditions under which she was working. Even without cutting her that slack we should recognize that her talent as a storyteller was still robustly sufficient to make the book a page-turner, at least for this reader, even if often the events seemed to me not to justify the attention the narrative was demanding. In other words, I found X to be a very flawed but nonetheless entertaining work. I’ve read plenty of bestsellers that I’ve liked far less.