A surprisingly interesting movie based loosely on the case of John Schneeberger, a Rhodesian-born Canadian doctor who was convicted in the late 1990s of multiple instances of rape, including of his own stepdaughter.The case was complicated by his devising a means of confounding DNA tests through implanting a Penrose drain filled with someone else’s blood in his own arm, and persuading nurses to pull the blood from that rather than his vein. Before I checked out the background of the movie I made a note about the mechanism of this cunning plan: “TOTALLY IMPLAUSIBLE!” Turns out I was wrong.

After an altercation with cheating scumbag boyfriend Billy (Pearl), in which she badly cut her hand, student nurse Kimberly “Kimmy”/”Kim” Jansen (Warren) goes to her local ER, where she’s treated by the generally revered Dr. Richard Darian (Hannah). He gives her a heavy sedative, during which she has fever dreams mixed in with fairly convincing images of him raping her. Once home, she finds stains on her panties that seem to be semen.

The local cop, Rod Kresgy (Henry), an old drinking buddy of Darian’s, puts every possible obstruction in the way of Kim’s pursuit of her case. The cops in the nearby city, Youngsfield, aren’t so very much better, although Detective Murray (Kapelos) seems unlike his colleagues to have an open mind. The trouble is that repeated DNA tests prove negative or at best inconclusive.

After a spell in an asylum—even her dad (Anderson) thinks she’s nuts to be making an unfounded accusation against the widely beloved doctor—Kim hires a PI, Emmet (Bratt), and with his help illicitly acquires a proper DNA sample, which, sure enough, yields a positive result when compared with those semen stains. Trouble is, the illicitness of the acquisition means the result isn’t admissible as evidence. Add to that, Kim as a single mother is widely assumed to be promiscuous: easy enough to accuse her of afterwards claiming as rape what was in actuality an act of consensual sex.

It’s at this point that Murray and local prosecutor Warren Hart (Butler) start batting for Kim. Still, their case looks hopeless, with all of Darian’s other victims refusing to talk, until he commits a new rape . . .

There’s one bit of this movie I completely fail to understand. A big point is made of the fact that Darian has a shoe box hidden in his basement whose contents he occasionally flicks through, presumably for masturbatory purposes. Late on in the piece we see one of the cops tasked with searching the house pulling this shoe box from its hidden niche . . . and then we learn nothing more about it! I thought for a while that the nine-minute disparity between the movie’s running time as given by IMDB and the running time it has on the DVD I possess might explain this oddity, yet further research would seem to indicate that IMDB, like my hypothesis, is simply wrong.

Back to the actual movie. John Hannah is absolutely splendid, as you’d expect from the actor who completely transformed my mental image of Ian Rankin’s character Rebus. (If you’ve only ever seen the Ken Stott series, seek out the Hannah precursors: they’re some of the best neonoir TV movies ever made. I say this as a Ken Stott fan.) Hannah and Estella Warren share the acting laurels, although there aren’t any weak links here. I especially liked Andrea Menard as Kim’s pal Heather, Madison Dewalt as Kim’s daughter Lizi, and Lindi Lee as Nola, the red-hot stripper mistress of the supposedly upright Dr. Darian. 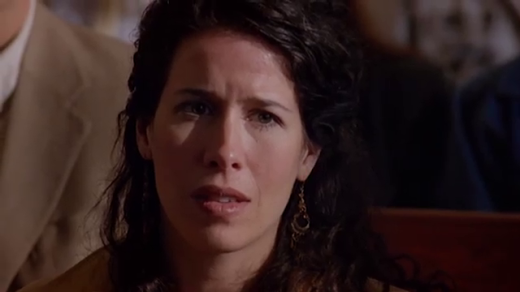 The fact that this was a Canadian production made me assume initially it must be a TVM or a DTV: as far as I can work out, this was something else I was wrong about.