Save Me is a very good case in point. Here we have, if not a first-rate, then certainly a perfectly creditable neonoir/psychological thriller that contains quite a few END_OF_DOCUMENT_TOKEN_TO_BE_REPLACED 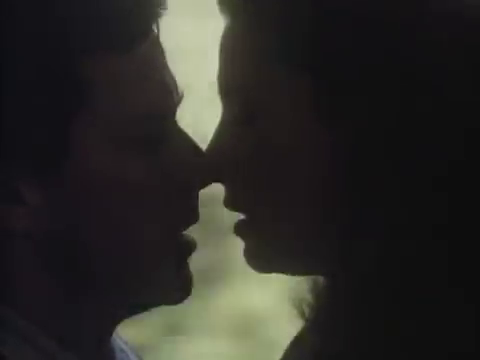 Still desolated three years after the death of his wife Kate in a train crash, or guilty over the fact that he no longer misses her and can’t even remember the last time they made love, psychology prof William Tauber (Matheson) decides to end it all by throwing himself off a train. Just as he’s about to do so, a passing beautiful stranger, interior designer Ali Broussard (Rogers), saves his life. She also takes him to his sleeper compartment on the train and gives him a pretty convincing carnal reason why life might be worth living after all.

William (Tim Matheson) readies himself for the terminal plunge.

After they disembark at their joint destination, Ali tries to persuade William that this was just a spur-of-the-moment thing, that he should accept it for what it was and not expect anything more. Understandably, he’s not so eager to let things lie. He has her business card—she owns a little company called The Decorator’s Touch—and in due course END_OF_DOCUMENT_TOKEN_TO_BE_REPLACED

The sequel to Motives (2004 DTV). Three years after the close of the earlier movie, Emery Simms is murdered in prison; Emery’s ex-wife Connie (Fox) is now married to the man who framed him, Brandon Collier (Blakemore), although, partly because of their inability to conceive, the marriage isn’t quite the bed of roses they’d anticipated—indeed, Brandon’s having an affair with his colleague Nina Welch (Leal).

Emery’s lawyer Ray Wallace (Johnson) has always been convinced Emery was innocent of the murder of Allannah James; now he brings Emery’s estranged brother, high-flying realtor Donovan Cook (White), in on the act, hoping to expose Brandon for the crook and killer he is. Soon Donovan has recruited Allannah’s widower, petty criminal Derrick Thompson (Torry), into helping their efforts. What at first the three don’t realize is that one of the cops on the Allannah James case, Detective Morgan (Jackson), was part of the coverup . . .

Rather slow-moving in its first half—sometimes it seems as though cast members had been asked to pause between their lines to pad the length out a little—this picks up later; by then, however, we’ve become aware that this sequel is intent on repeating almost exactly the formula of the original, remixing the same ingredients, complete with a trick-instigated meeting between Connie and her husband’s mistress (a mirror of the meeting between Connie and Allannah in Motives) and especially a near-concluding scene of Brandon being led struggling away from Connie that’s almost a replica of the one in which Emery was dragged away from her at the end of the earlier movie. The lazy lacing of the dialogue with hackneyed profanity—”You’re a lyin’-ass murderin’-ass piece of shit” is one gem—doesn’t help matters.

A point of interest is that Donovan isn’t pictured as a saint—far from it, he shares many characteristics with Brandon, including that he’s cheating on his partner Rene (Sidora) with colleague Saundra (Vaidya). The transformation of Brandon from the charming, superficially guileless snake in the grass of the first movie to the more overt (to the audience) and brutal villain here is a credit to Blakemore’s skills. There’s a nice minor role from Young as Morgan’s straight-arrow superior officer, Captain Abraham.

Even though Connie looks like Vivica A. Fox, Emery proves easy prey when young floozy Allannah James (Brooks) throws herself at him; it’s not long before he has her set up in a luxury condo. But soon things are spiraling out of control. The cops, in the shape of Detectives Pierce (Rowell) and Morgan (Jackson), believe—correctly—that Emery’s tied up in shady dealings and a manslaughter.

Allannah’s estranged husband (and pimp?) Derrick Thompson (Torry) turns up at the restaurant and picks a fight with Emery, then goes to the condo and demands sex and/or money from Allannah. For her part, just as Emery has decided he should get his head together and rebuild his relationship with Connie, Allannah announces first that she’s in love with him and then that she’s pregnant with his child. When he’s dismissive of her, she tricks Connie into a meeting at which Connie gives her a check for $100,000 just to go away.

Back at the condo, there’s a confrontation between Emery, Derrick and Allannah, after which Allannah’s found with her throat cut . . .

In the movie’s final moments, with Emery incarcerated for the two killings, we discover—as does he—that his restaurant’s manager, old college buddy and supposed all-around nice guy Brandon Collier (Blakemore) has been puppetmaster of most of the events, and of Emery’s downfall. As the credits roll, we see the “missing” scenes of Brandon setting up Allannah as lure and getting Derrick in on the act . . .

Much of the movie’s very well and cleverly made, with an interestingly sophisticated narration, and the ending revelation is nicely concealed until the time’s right; among the cast, Blakemore is outstanding. Yet Motives does have its problems. Emery’s arrest is clumsily staged, the sex scenes are cheesy, it’s annoyingly unclear if Connie has been aware of Brandon’s machinations, and Atlanta seems to be almost entirely depopulated; again and again there are exterior shots in which the characters seem to be playing out their drama in an otherwise empty city.