It’s some while before this reveals the full scale of its noirishness, but from the outset it has an archetypal noir atmosphere of unrelenting futility; it’s an astonishingly depressing piece and yet in a strange sense a refreshing one, because we can sense right from the opening moments that this is a movie made with a purpose.

In Macedonia, as the country is transitioning toward independence, young Marko Trifunovski (Kovacevic) is a pretty little boy who’s creatively gifted, and thus the obvious target for horrific school bullying in his backwater hometown; since the psychopathic leader of the thuggish gang that persecutes Marko, Levi (Jovcevski), is son of the equally thuggish local police chief, Blashko (Acimovic), there’s not much anyone can do to stop his campaign of terror.

At home, Marko suffers an unemployed father, Lazo (Jovanovski), who spends his time throwing rocks as part of pro-Communist demos, getting drunk, and being hungover; a mother, Angja (Mosevska), who seems an empty shell, someone from whom the soul has fled; and a loudmouthed, bullying, sluttish sister, Fanny (Manaskova). Marko gets occasional affection from Lazo, but otherwise is quite alienated from his family.

However, one of his schoolteachers (Nadarevic), a Bosnian despite teaching the use of the Macedonian language, recognizes Marko’s talent, and encourages him to write a poem for entry into an international competition that might take Marko to Paris; what the teacher—like the rest of the staff at the school—fails to recognize is that being singled out in this way can only lead to Marko’s being yet more viciously brutalized by Levi’s gang. (Both teacher and Marko are constantly being called faggots, and there’s a definite sense that the teacher has indeed fallen in love with Marko; yet it’d be a mistake to think there’s any shadow of pedophilia over the relationship.)

Marko has been using as sanctuary some abandoned railway carriages. One day he discovers that a mercurially charismatic criminal fugitive, ironically called Paris (Djuricko), has taken refuge in the carriages. The thief befriends the little boy, HUNTED (1952) style, introduces him to smoking, drinking and stealing, and teaches him how to use a gun. It’s this latter skill that eventually proves the downfall of Levi and his gang but most particularly of the teacher, whom Marko has come especially to detest: the teacher, after all, offered him hope that he’d have been better off never having, the hope that he could use his literary skills to escape from the sewer of his daily existence—a hope that proves false because, as Marko decides, no one ever escapes the sewer. The extent to which this is allegorical of Macedonia’s fate is left for the viewer to decide. 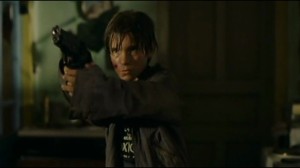 Young Marko Trifunovski (Kovacevic) discovers power grows from the barrel of a gun.

Despite being very tough to watch, the movie’s quite spellbinding and beautifully made, without a single weak performance. Jovanovski, as the scapegrace father, living in a yesterday where Communism supplied jobs for all and ever hoping that his big break will come from a bingo win, is exceptional, but Kovacevic is even better than that; he amply conveys Marko’s pain even though for the most part the child meets each new horror with a sort of measured impassivity that’s occasionally belied by the danger we sense lurking behind his stare. Iluzija won a few minor accolades, but not nearly as many as it deserves.

Established 2008 — A fearless faith in fiction by Des Lewis — Employing an ‘intentional fallacy’ consciousness — Various passions of the reading moment — Walter de la Mare, ELizabeth BOWen, Robert Aickman and many others old and new — Please click my name in sidebar below for this site’s navigation and backstory.