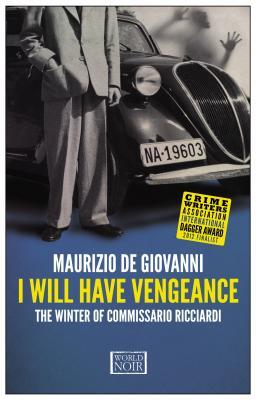 A fine example of the frequent unhelpfulness of genre categorizations.

Homicide detective Commissario Ricciardi of the Naples police has an unusual ability: like the kid at the heart of M. Night Shyamalan’s The Sixth Sense, he can See Dead People — specifically, those who have died a violent death, whether by accident or by malicious intent. These revenants aren’t able to consciously communicate with him, but their actions can assist him in his investigations . . . or, sometimes, hinder him with equivocal signals.

In Ricciardi’s latest case, a brilliant operatic tenor has been discovered murdered in his dressing room. Although millions loved the Arnaldo Vezzi they saw on stage or heard on radio or records, Ricciardi soon discovers that in real life the man was an arrogant, exploitative swine. While all of Vezzi’s colleagues are distressed that he’s dead, because in one way or another he represented a meal ticket, none of them is especially unhappy or surprised that finally someone did what they’ve all dreamed of doing.

The time is 1931. Ricciardi must operate within a rigidly hierarchical establishment where everyone is ultimately beholden to the fascist overlords, rebellion against whom — even minor — can bring down terrible retribution on one’s head. True, the restrictions aren’t as yet too draconian for a man in Ricciardi’s position, recognized as he is as the finest detective Naples possesses — even if he is a bit strange, a loner who has funny habits and prickly manners — yet the inhibitions are undoubtedly there.

As for Ricciardi himself, because he’s seeing dead people and their grief at every turn, he’s become saturated with sorrow. People don’t like looking him in the eyes because of the pain they see there. He lives in a self-imposed psychological exile from the society around him, capable of love yet incapable of letting himself love, yearning for the neighbor he can see embroidering in her room opposite his window every night yet tongue-tied on the solitary occasion he meets her face to face. He seems able to love only if there’s an uncrossable distance between himself and the object of his love.

So is this a psychological novel? Well, maybe that’s about as close as it comes to any of the standard genre classifications.

In other words, the best way to approach I Will Have Vengeance is, I think, simply to take it on its own terms as a novel, and forget any preconceptions as to what it’s “supposed” to be.

Of course, the publisher isn’t frightfully helpful here. The back of the cover bears the label “WORLD NOIR” while also carrying a review quote that says, “There’s more than a touch of Agatha Christie in this tale.” I’d vehemently dispute the latter comment on all sorts of grounds. At first I rejected the “noir” label, too, but later thought persuaded me it was more justified, in the same way that Camus’s L’Etranger, which I recently read (for the first time, to my shame), could likewise be considered as “WORLD NOIR” even if that mightn’t be the first way you’d think of it.

So is this a good novel? Well, yes, I’d say it probably is.