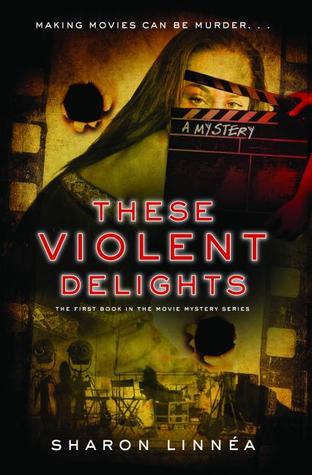 Because I’ve spent part of my professional life writing about movies, I have a fascination for novels that have the cinema or moviemaking as a backdrop. When I spotted These Violent Delights for sale a few months ago I therefore snapped it up: a murder mystery set in and around the making of a classic movie, what larks!

Twenty years ago young Anastasia Day was plucked out of nowhere to star as Isolde in hotshot director Pierce Hall’s screen adaptation of the Tristan and Isolde legend. Since then she’s known love and tragedy, and has become an agoraphobe subject to panic attacks. When plans are announced for a twentieth-anniversary rerelease of the movie and everyone seems to want to rope recently widowed Anastasia into them, she begins to realize that far too many of the cast and crew seem to have shuffled off this mortal coil under curious circumstances. Could someone be conducting a vendetta against the participants in the movie?

Well, of course they could.

With a small group of surviving friends from the original production whom she trusts — or can she? — Anastasia sets about trying to bring the hypothetical serial killer out into the open, agreeing to use herself as bait. Is this an altogether sensible idea?

The novel’s intriguingly structured, with some passages being set in the present, some twenty years ago around the time of filming, and some being extracts from press puff pieces or the Making of book that was published as a tie-in to the original release. Linnea controls these disparate strands very well: I was never in any confusion as which timeline I was in.

The moviemaking background seemed to my untutored eye to be pretty authentic, and a cover quote from Wesley Strick — screenwriter on things like TRUE BELIEVER (1989), CAPE FEAR (1991) and FINAL ANALYSIS (1992) and director of The TIE THAT BINDS (1995) — would seem to affirm this impression.

That’s the good news. Also good news is that These Violent Nights is something of an addictive read. Helped by an insomniac night, I raced through this longish novel in what seemed like next to no time, and found I was sneaking a few pages here and there when I was supposed to be doing other things. That’s a symptom of effective pulp literature, of course, and it struck me after a while that this was in essence what I was reading: pulp literature for the 21st century. I could point you at countless examples of clunky writing and rotten or cardboard characterization (even spelling errors, like “broach” for “brooch” and “Tinkerbelle” for “Tinker Bell”), but the fact remains that, scoff as I might about all the book’s narrative infelicities and plotting follies, I was held in its grasp.

That said, the text desperately needed some editorial tidying, the denouement was outright risible, and I really, really could have done without the spanking scenes! I was also a little troubled by the age gap between Anastasia and one of her lovers, although the relationship was perfectly legal. Come to think of it, I’ve occasionally found myself confronting qualms similar to all of these when reading original-era pulp pieces, so I guess it’s part and parcel of the literary style.

3 thoughts on “book: These Violent Delights (2012) by Sharon Linnea”