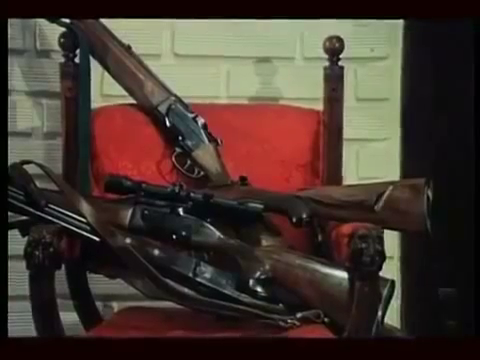 High-school basketball player Luka (Galo) is having an affair with the much older, married Dina (Jerman), a liaison that’s apparently pretty well known to his team-mates, because she comes along to their every game and gazes yearningly at Luka from the stands. The pair meet in such romantic locales as the bottom of an empty swimming pool and, often in slow motion and to the sound of soft-porn-style music—in fact, a not-bad knockoff of “Je t’Aime, Moi non Plus”—do their stuff.

To her, their assignations seem all too short; in order that they can spend more time together, she arranges with stolid businessman husband Gantar (Baloh), a gun/hunting fanatic, that they should END_OF_DOCUMENT_TOKEN_TO_BE_REPLACED

A prison movie of peripheral noir relevance but of interest because of its unusual setting—a Serbian prison during the Nazi occupation of Yugoslavia in 1941–5—and its subtext. In the opening credits we learn that the movie celebrates the 50th anniversary of the Communist Party, and the prisoner protagonists, captured Yugoslav Partisans, are all communists of greater or lesser fervor. The prisoners and their jailers are assuming that in the not too distant future the penitentiary’s administration will be taken over by the Ustaše, the Croatian version of the Gestapo, at which time the miseries and cruelties will inevitably intensify manifold.

We see events through the eyes of Slobodan Radenik (Djurič), who is probably representative of novelist Davičo himself. He arrives at the penitentiary almost looking forward to his sentence because he knows he’ll be spending it in the company of legendary communist resistance figure Vitor (Zivoinovič). After a beating from the guards lends him in the infirmary, Slobodan has sex with a visiting nun (possibly his girlfriend in disguise?) as they watch an old man die—one of several small surrealist flourishes that ameliorate the movie’s prevalent grimness. Soon he’s fairly well integrated with his fellow communist inmates, who engage in constructive dialectic as a matter of course whenever there’s a decision to be made, although most often bowing to the inclinations of Vitor, who serves as local party secretary. A hunger strike promoted by Vitor brings them a relaxation of the regime. 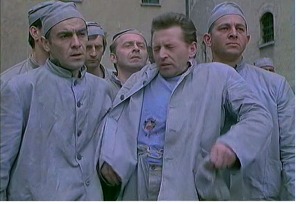 Croatian Communist Antun Dezman (Julije Perlaki) would rather die under Croatian bullets than betray his Serbian and other comrades to the fascist Ustase.

But then the status quo is thrown into turmoil by the arrival of Troskot (Tadič), another politically heavyweight communist; we learn in due course that Vitor sheltered him from the cops for weeks before Vitor himself was arrested . . . at which time, although Vitor never formally learns this, Troskot immediately took advantage of his absence to force himself on Vitor’s wife Mara (Jerinič). In the prison, when Troskot engineers Vitor’s downfall as party secretary, succeeding to the post himself, Vitor chooses solitary confinement to the continued society of the other communists; he eventually taunts a guard into shooting him dead as he heads off toward open country and freedom.

Slobodan becomes regarded as an expert on tunneling. We understand there was an abortive attempt earlier to excavate a way out of the prison from one of the network of pipes and sewers that lies underneath the complex. This time the efforts of Slobodan and his colleagues look destined for more success, but then the project is hijacked for political gain by Troskot and his toady Jernej (Jovič), who now seek the downfall of Slobodan’s best friend, the professorial Krajinovič (Simič), a thoughtful rather than slavishly doctrinaire, obedient communist.

Troskot and Jernej stage a show trial in which they plan the condemnation of Krajinovič; when Slobodan declines to cooperate, they try to accuse him as well of betrayal of the comrades. This backfires in a big way when the newcomer Grujič (Tatič), sent by Central Committee, exposes their conspiracy as a tissue of lies aimed at consolidating Troskot’s power. But Slobodan must live with the guilty knowledge that he came within a whisker of speaking out falsely against his best friend . . .

Tensions escalate as a planned mass breakout comes to nothing because of lukewarm support from the Party hierarchy outside and as a flood collapses Slobodan’s tunnel. Grujič manages—just—to save the life of the mentally unstable prisoner Albrecht (Aligrudič), whom others seek to kill lest he betray them to the guards. From time to time the comrades hear the sounds of firing squads at work in the prison yard. And then the dreaded Ustaše arrive, intent on shipping the comrades to a death camp.

In the nick of time the floodwaters retreat, and our friends escape through Slobodan’s tunnel into the welcoming arms of the partisan SKOJ (Savez Komunisticke Omladine Jugoslavije/Young Communist League of Yugoslavia), sent to save them.

The movie’s title translates from the Serbian as “escapes”; I’m not sure if this refers to other events than the obvious attempts to break out of the penitentiary. For a movie produced in a communist country, Bekstva is refreshingly open about the way that Communism can all too easily be perverted by the corrupt and power-crazed, personified here by Troskot and Jernej. The editing uses an odd but quite effective way of indicating flashbacks and the like: a momentary flooding of the image with pink, almost as if the film had suffered a processing error.

Although it has its longueurs, especially in the first half as the comrades discuss ad nauseam the pros and cons of various decisions, Bekstva‘s overall effect is quietly impressive, aided considerably by a sensitive central performance from Djurič, who’s more than ably supported.

The movie doesn’t seem available on Amazon.com, but Davičo’s book is listed: BEKSTVA