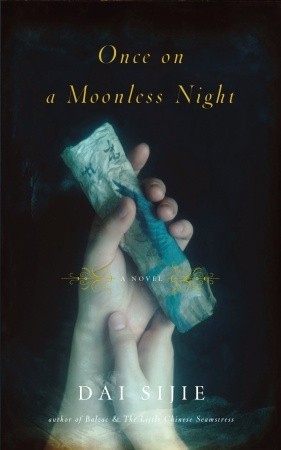 In the aftermath of China’s Cultural Revolution a young French student (our anonymous narrator) is studying in Peking/Beijing when she falls in love with a local greengrocer, Tumchooq. But this isn’t any old greengrocer: he’s the estranged son of the French linguist Paul d’Ampere, the first person to “crack” the dead language Tumchooq, for which his son was named. The language was initially known to modern scholarship only through a partial sutra written on a torn scroll that played a part in the lives of both of China’s “last emperors” and some of their predecessors.

This gives Tumchooq (the man) the excuse to spout off great scads of Chinese history, quoting long passages from books by heart because he has this wonderful eidetic memory. When his father, imprisoned in a labor camp for offending against the People’s Republic in some way, is killed by a mob of fellow-inmates, Tumchooq dumps our narrator and goes off in search of his namesake language: its origins, its literature, its ultimate decipherment, the other half of the sundered scroll.

That’s about it for the foreground plot, which forms a surprisingly small fraction of this book, which is otherwise occupied by the aforementioned scads of historical infodump. Don’t get me wrong: I’m actually something of a fan of infodumps, and on occasion the ones here were interesting, but for most of the time I was plowing through Once on a Moonless Night I didn’t feel I was reading a novel.

In other words, I found this book pretty heavy going. Which was a pity, because whenever we moved away from background information — whenever the narrator was telling us about what was happening to her in her here-and-now, or when Tumchooq was talking about his own past — the text suddenly became a whole lot livelier, so that I was turning the pages eagerly to find out what would happen next. As noted, the foreground plot is pretty thin, but when it’s in focus it’s engrossing enough. The trouble is that, especially in the first three-quarters or so of the book, it’s never in focus for very long before, kajunk, we run smack bang into the brick wall of some new, long, aridly couched — because supposedly quoted from a textbook — indigestible wodge of historical background.

For what it’s worth, Once on a Moonless Night is often very prettily written, and it held my attention sufficiently that I persevered to the end, but it seemed to me not so much a novel as a meditation on language, the love of language and (I think, though I may be projecting here) how the love of language can lead to the love of others and even oneself. It’s an interesting piece and on balance I’m glad I read it, but I wouldn’t want to have to read it again.