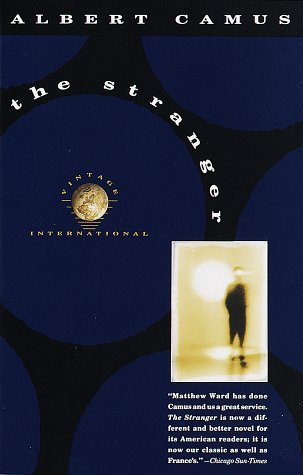 Albert Camus’s L’Étranger/The Stranger/The Outsider is one of the most written-about books of the 20th century, so I doubt that any jejune thoughts of my own are going to add much to the sum of human understanding. It’s a book that somehow I didn’t read during my schooldays and should certainly have read since; I’m kicking myself that I put it off until now, because I really liked the novel — which is like something that Jim Thompson or David Goodis might have written had they been raised in French Algeria in the first half of the last century: the book was created within a much different culture to theirs, but it has the same underlying nihilism and, I think, despair over human behavior. (Translator Matthew Ward, in his introductory Note to this edition, suggests this was not just a matter of happenstance, that Camus was deliberately emulating US writers like Ernest Hemingway and James M. Cain.)

The novel’s narrator, Meursault, is a young French Algerian clerk who’s devoid of social skills and quite alienated from the society around him; he’s regarded as odd because he shows no signs of grief at his mother’s funeral. He’s not completely without emotions — he derives aesthetic pleasure from seeing “a good sky,” smelling seaside air, and so on — but he doesn’t understand how, for example, love could exist or why we regard our lives as having purpose. When his girlfriend Marie, whom he likes looking at, being with and bedding, asks if he’ll marry her he essentially tells her that he doesn’t really see the point but, if it would make her happy, then okay, he supposes so. It’s with this same lack of connectedness to what the rest of us consider the important aspects of life that he shoots dead a young Arab who’s being vaguely threatening: he doesn’t realize at the time the significance of the act. Similarly he doesn’t realize the significance of imprisonment until he discovers that he’s having to do without some of the things he likes, such as cigarettes and bedding Marie. Once it’s explained to him that being deprived of pleasures is part of the punishment, he’s fine with it.

The crux of Meursault’s existence is, I think, contained within a single sentence (p85 of the Vintage International edition): “And I had the odd impression of being watched by myself.” In other words (or so I read it) he’s so alienated from people that he’s even on occasion alienated from himself. And, just as he doesn’t comprehend what makes other people tick, he doesn’t see any necessity to try to analyze what makes him, Meursault, tick: he just is. Mind you, the rest of society doesn’t show much interest in what makes him tick, either: his alienation and affectlessness are interpreted by most other people as soullessness, and thus as something to be condemned. One popular reading of the book is that Meursault is convicted and sentenced to death not for the murder but for failing to weep over his mother’s death, and this was I gather in Camus’s mind as he wrote the novel.

When I first became aware of the novel it was under the title The Outsider, and I think I still prefer that title to the one more commonly used here in the US, The Stranger, primarily because it applies better to some of the scenes late in the book when we see that Meursault’s oddness is being used as an excuse to otherize him — to paint him as something other than the ordinary human being and thus blamable for all manner of sins. For example, the prosecutor in Meursault’s case claims that Meursault’s attitude is at least partly to blame for the completely unrelated parricide that’s going to be tried in the courthouse the next day. Meursault can be blamed blithely because he’s not part of the in-group, of “us”: he’s an outsider, an other.

Luchino Visconti filmed the novel in 1967 as Lo Straniero; I’m hoping to be able to get hold of a copy of this movie soon for discussion here at Noirish. Watch this space.

A fearless faith in fiction — Various passions of the reading moment — Reviews based on purchased fiction books since 2008 — Elizabeth Bowen, Robert Aickman and many others — INFORMATION and NAVIGATION on this site’s front page — Let us now triangulate each book together!