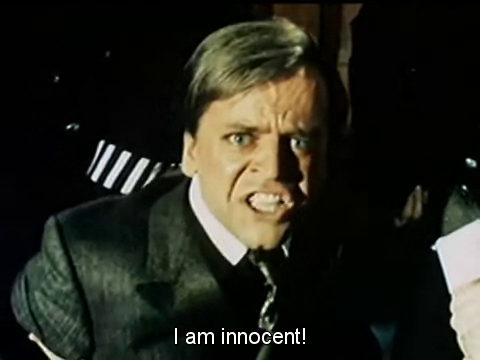 We open with a court scene in which David Donald “Dave” Emerson (Kinski), son of the third Earl of Emerson, is being sentenced to life imprisonment for the murder of the estate gardener, Amory (Haller)—a sentence commuted, because of his diagnosed unsoundness of mind, to indeterminate detention in the mental facility run by Dr. Albert Mangrove (Lange). But Dave’s not long there before someone slips a key into his cell; using it, he’s able to make his escape and flee the few miles home to Gentry Hall through the spookily foggy woods. Once there, he goes to the room of his identical twin Richard (also Kinski); finding him absent, Dave purloins a set of his clothes so that he can pass as his brother.

Also in Gentry Hall are Dave’s other brothers Robert (Parten) and Charles (Danneberg) and the youngest sibling, Myrna (Körner), none of whom can believe that Dave is really guilty of the crime for which he was convicted. More enigmatic on the matter are the ex-stripper stepmother of the END_OF_DOCUMENT_TOKEN_TO_BE_REPLACED

An amiable piece that’s very loosely based on an Edgar Wallace classic; it has the distinction of being the first in the long series of German krimi movies based on Wallace’s work. All London lives in terror of a criminal mastermind, called The Frog because of the goggle-eyed mask he wears to keep his identity a secret even from his closest henchmen; said henchmen, of whom there are nearly three hundred, can be identified by the frog emblem indelibly stamped on their forearms, as we discover when the cops try to infiltrate one of their number, Inspector Genter (Hedman, uncredited), into the gang. Before his gruesome death, Genter was given orders to kill Ray Bennet (Wilz), wastrel son of an enigmatic, taciturn, dictatorial father, John (Lange). The hit is now put in the hands of another henchman, the knife-throwing Everett aka K33 (Beiger), who muffs it, not only throwing his knife at the wrong person but missing.

That wrong person is rich private eye Richard Gordon (Fuchsberger), the nephew of top cop Sir Archibald (Fürbringer), who happens to be supervising the cop who’s leading the hunt for The Frog, Inspector Elk (Lowitz). Richard’s attention has been caught by Ray Bennet’s sister Ella (Anthes), and he is walking with her through the woods near her home when the errant knife is hurled. Unknown as yet to either of them is that The Frog, too, has set his sights on her.

Ray is fired by his boss, Maitland (Rasp), for impertinence. His immediate superior, Philo Johnson (Brockmann), is sympathetic, and indeed it’s not too long before Ray gets another job, this time in an unspecified role at the Lolita nightclub, whose hostess, Lolita (Pflug), easily seduces him into the right state of brainlessness that he doesn’t wonder at all what’s really going on. 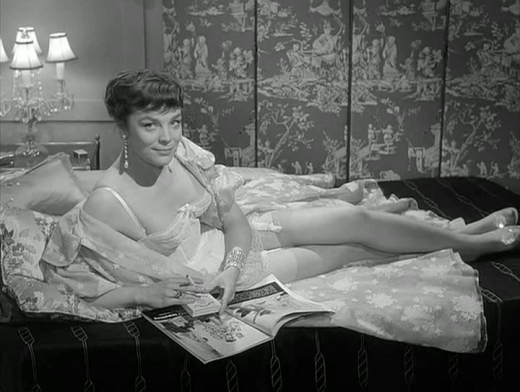 We soon discover the club is owned by Maitland . . . except that Maitland’s really just a figurehead for The Frog. The Frog, you see, is hoping that, by framing Ray for murder—the murder of the Lolita club’s manager, Lew Brady (Kolldehoff), in fact—he can END_OF_DOCUMENT_TOKEN_TO_BE_REPLACED