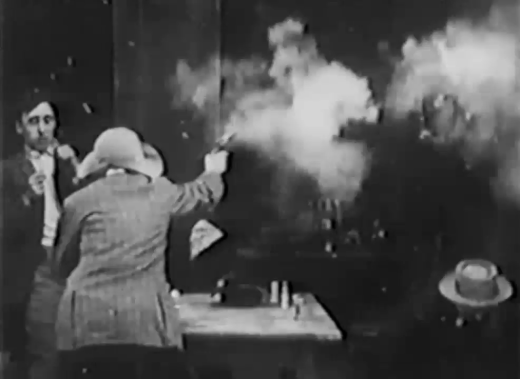 An early Mack Sennett silent that’s of interest because it can be read as a precursor of the Keystone Cops comedies and because it offers one of the first onscreen examples of the trope of the female detective outwitting her male counterparts. That may not seem like such a big deal today, but remember that in 1912 women weren’t considered intelligent enough to be entrusted with the vote.

Fed up with her dreary job at a dry cleaner, Kate (Normand) comes across a newspaper ad for a detective school, the Alert Detective Agency, and decides this is the future for her. The school, in the event, turns out to have a sort of Trump University attitude toward academic integrity: its boss (Mace) gives a minute’s instruction on how to wear a false mustache and wave guns around, issues a badge, takes the money and runs that’s it.

Kate spots a suspicious-looking fellow (Opperman, I think) in the street, follows him, and unearths an anarchists’ den and a bomb plot. She borrows a set of male clothing from her old employer and, false mustache moderately firmly in place, infiltrates the anarchists.

Later, after escapades, she enlists the aid of the detective school boss. He hares off after the wrong man and, when he calls in the blundering cops, what they thought was a bomb proves to be a round of malodorous cheese. Meanwhile, of course, our Kate foils the bomb plot and arrests the kingpin.

The comedy’s mildly amusing rather than roll-in-the-aisles funny. What holds the attention is the fresh-faced vigor of Normand’s performance, which seems to infuse the rest of the proceedings with some of its energy. Normand was of course very soon to become a major star after Sennett founded his famed Keystone Pictures Studio, in the same year as this movie’s release.

The office boy at the detective school is played by Jack Pickford, younger brother of Mary and Lottie Pickford. Both of the lesser-known Pickfords died young (Jack aged 36 of booze, Lottie aged 43 probably likewise, the latter suffering the ignominy of a funeral service at the Wee Kirk o’ the Heather Church, Glendale, California); Mary, the eldest and most sobersides sibling, lived on until 1979 and the grand old age of 87.

Fred Mace as the boss of the detective school, with Grace Normand and, in the background, Jack Pickford

Incidentally, the synopsis given for this movie on the TCM site seems a trifle awry:

Bud Howard and his stoner buddies hit the jackpot when they come up with a giant bag of kush. They quickly realize it belongs to a trigger-happy drug lord, and hide it under their house. When an unexpected bathroom mishap accidentally fertilizes the stash, they seize the opportunity to sell the “super weed.” Now Bud and his friends must escape the crossfire of rival gangs while still finding time to save their weed and get high.