|
No one can hide from the eyes of the secret police!
| 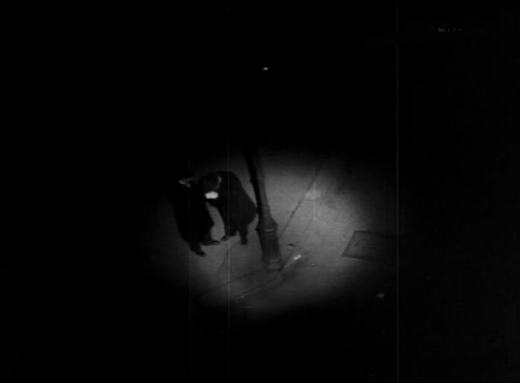 Runar Schildt set the novella upon which this movie is based during the Finnish Civil War of 1918. The movie pushes the events back to 1904. In either instance, a group of Finnish freedom fighters is rebelling against repressive Russian rule. The version of the movie that I’ve seen is the 86-minute re-release; the original apparently ran to 101 minutes. The shorter version holds together coherently, but time and again there’s the sense that nuances are missing and likewise some of the plot elements.

Robert Hedman (Mänty) is leader of a group of radicals (Konst, Kervinen, Kuoppala, Salminen) who devote themselves to printing and distributing pamphlets protesting against repression by the Russkis and demanding freedom. One night on his way home, Robert realizes he’s about to be picked up by the secret police and so hides his precious notebook, complete with details of his co-conspirators, in a dark alley.

When he returns, after having been frisked, he discovers the notebook gone.

The person who has purloined it is Manja (Paananen), the young mistress of the foreign-born black marketeer Jonni Claësson (Karilo). It’s difficult to be END_OF_DOCUMENT_TOKEN_TO_BE_REPLACED

Prostitute Anni (Rimpilä), who insists she’s not making the game her career but shows no signs of trying to escape from it, inevitably falls foul one night of a violent john. Although she escapes with the money she’s owed, she’s in no condition to find her way home. She wakes next morning to discover that a man named Karo (Pöntinen) has rescued her back to his pad, let her sleep in his bed while he took the couch, and now makes no advance more aggressive than giving her his name and phone number.

Anni (Minna Rimpilä) rues the rigors of her trade.

Soon they’re in the throes of a END_OF_DOCUMENT_TOKEN_TO_BE_REPLACED

vt The Criminal Woman; vt A Woman of Crime

One of the reviewers of the Encyclopedia complained that I hadn’t included enough Finnish films noirs. I’d been sort of feeling quite proud of myself that I’d included as many as I had, by comparison with competing reference works, but I suppose it’s all a matter of perspective. Whatever, the reviewer very decently gave a list of some of the Finnish movies I hadn’t included, so I’ve decided to try to correct, at least in part, my omissions.

Rikollinen Nainen is more melodrama than film noir, but it has enough of the noirish tropes—amnesia, accidental bigamy, an innocent stuck in the joint, etc.—that, if I’d known about it, I might well have included it in the book: a borderline case.

Free-spirited Eeva (Linnanheimo, who also scripted) has been playing off against each other her two suitors, Judge Lauri Isokari (Majuri) and Kristian “Kris” (Ingvall), a doctor. In the end she chooses to marry Lauri, much to Kris’s chagrin—although he’s very civilized about it, remains a steadfast friend of both, etc. Over the years, however, Lauri starts to suspect that Eeva and Kris are more than friends—he even briefly worries that he might not be the father of his and Eeva’s son Kari (Petsola). After one blazing row, Eeva storms out to go to her mother’s, declaring she’ll return for Kari in the morning.