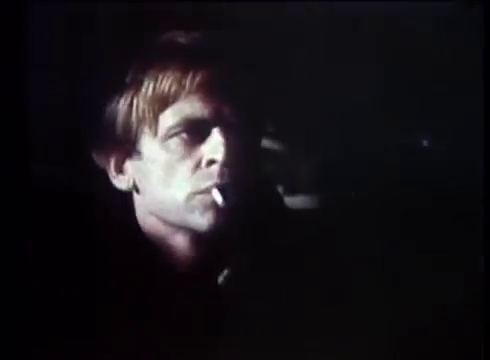 This is usually listed as being based upon The Three Just Men (1926) by Edgar Wallace, but has nothing to do with that novel. It was filmed in color, although most of the copies released to the US (as Psycho-Circus) were in black-and-white.

The daring descent from Tower Bridge to the waiting boat.

A mysterious criminal mastermind organizes an armored-van heist on London’s Tower Bridge, the gang escaping along the Thames via speedboat. When one of the van guards puts up a fight, he’s shot by his erstwhile colleague, corrupted guard Mason (Maddern). Gang leader Jackson (Bowman) is all for offing Mason, who has turned a simple robbery into a murder case, but the boss, on the phone, issues different instructions: Mason must bring the loot from the heist to The Old Farm, near Windsor. When Mason gets there he finds the place is the winter quarters for Barberini’s Worldwide Circus. He doesn’t have time to discover much more, though, because END_OF_DOCUMENT_TOKEN_TO_BE_REPLACED

Brilliant scientist Ernst Hildebrund (Jacquemar) escapes from behind the Iron Curtain into Austria, where he heads for Vienna to make contact with the British Military Intelligence agent who’s been wooing him toward defection, Allan Peters (Price). His escape, as he leaps from a train at a border crossing and is chased through swirling mists by armed guards intent on shooting him down like a dog, is something of a pièce de résistance, especially in the context of a postwar cheapie like this.

After Hildebrund phones Allan from a callbox and is told to wait where he his, the frightened scientist is spooked by a couple of sinister-seeming strangers and instead heads to the library for the blind where his daughter Helen (Garner) is a librarian. Allan, who has been romancing her just in case of such an eventuality, heads there too. Of course, the bad guys have likewise guessed Hildebrund might make contact with his daughter, and have planted one of their number (Buettner) there as a supposedly blind reader. When Hildebrund arrives, terrified by now of everyone, he hides an envelope containing his secret formula in a book on the cart pushed around by library staffer Carl (Dorn), who happens to be an undercover operative working with Allan. The fake blind man kills Hildebrund but, unable to find the document, heads back to his superior (Kittler), who’s operating out of a fully functional bakery.

Allan arrives—too late!—and investigates, interviewing the eight genuinely blind readers who shared a table with the faker. Of course, being blind, they can’t tell him much, although one of their number END_OF_DOCUMENT_TOKEN_TO_BE_REPLACED