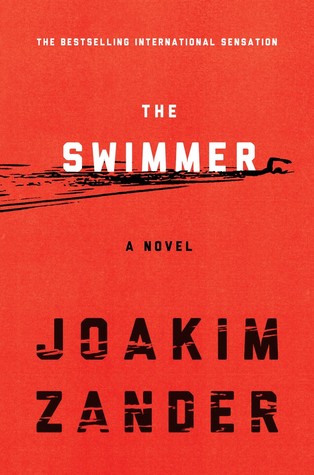 The publisher seems keen to make us believe that this novel represents the emergence of a new John Le Carré or Graham Greene. Their copywriters should read a bit more Le Carré or Greene before making such comparisons, because they’re not doing Joakim Zander any favors. You won’t find in The Swimmer any of the philosophical subtexts you’d expect to encounter in a Greene “entertainment” and you certainly won’t find that slow-moving, intricately layered creepiness/paranoia that marks the best of Le Carré.

What you’ll find instead — and this is what The Swimmer should be lauded to the skies for — is a slam-bam, action-packed thriller that’s so beautifully put together (and so superbly translated, by Elizabeth Clark Wessel) that the book practically reads itself, with the sole task of the reader being to cling on by the fingernails. In this context you might not regard The Swimmer as great art, but you’d be wrong not to recognize it as great craft, and for the average reader — i.e., moi — that’s if anything even better. Yes, if exiled to a desert island and allowed just one translated novel, I might opt for Anna Karenina or The Name of the Rose, but here in the cultural desert of northern New Jersey I sometimes prefer a splendidly executed thrill-ride, and that’s what The Swimmer offers.

We’re told the story from multiple viewpoints, one of which is that of the unnamed Swimmer himself, a veteran CIA agent now relegated to desk jobs because regarded as unreliable in the field. Back in 1980 when he was posted to Damascus his girlfriend — the mother of his infant child — was blown to bits by a car bomb intended for him. As we guess far more quickly than he does, the bomb was planted by his masters because he was inadvertently coming too close to exposing material that would be embarrassing to them. In order to protect her, he sent his daughter, Klara Walldéen, to her grandparents, who raised her in a remote Swedish archipelago. Thirty-three years later, in 2013, Klara is working in Brussels as the right-hand woman of a prominent Swedish Euro MP.

It took me a while to realize that Klara Walldéen was the novel’s primary protagonist, because for a good many pages that role seems to be filled by her ex-boyfriend and childhood sweetheart — and the only man she’s ever really loved — Mahmoud Shammosh. This sudden switch of focus is just one of many times when The Swimmer — to my delight — caught me unawares.

Contemporary events are told to us in parallel strands by Clara, Mahmoud and a hedonistic EU lobbyist, George. By contrast, the strand related to us by the Swimmer (in first person rather than, as for the other strands, third), starts back in 1980 and slowly catches up to the present day (which is, for the purposes of the novel, around Christmas 2013). I found this difference of chronology very stimulating: clearly the story of the Swimmer was eventually going to intersect with the other characters’ here-and-now, but I’d no real idea how it was going to do so . . . and, even when it did, late in the novel, it went in a completely unexpected (by me) direction.

So, what’s happening in that here-and-now? Well, for reasons that take their own sweet time to emerge, Bad Actors want Klara dead. And Mahmoud. And various of the people around them. Any “collateral damage” — i.e., slaughter of innocents — that might occur is perfectly acceptable to those Bad Actors. And the Bad Actors can be directly linked to the CIA and the US-led “War on Terror,” so the CIA itself is involved in trying to make sure the dirty secrets stay under the carpet, even if that costs civilian lives.

As you’ll have guessed, the novel’s not exactly uncritical of the USA’s embrace of such delights as institutionalized torture, mass murder of civilians, foreign assassinations and the like. For me this means that The Swimmer offers an extra bonus: the chance to see ourselves as others see us. Zander’s characters have no truck with such repulsive euphemisms as “collateral damage” and “enhanced interrogation,” and nor with the people who hide behind them. Glancing around Goodreads, I can see that a few American readers of this novel have been disconcerted to find their complacency being punctured by this frankness. For me, having my assumptions challenged is one of the many reasons to cherish foreign fiction!

So maybe The Swimmer does have subtexts after all, and I stupidly underestimated it in my preamble. Even so, its great triumph is as a thriller: Proust it ain’t. I cannot recall any novel I’ve read in the past couple of years that has had me turning the pages faster or burning more of the midnight oil. Zander has, I discovered, written a follow-up, and I immediately put it on order. If it’s even just half the thrill-ride that The Swimmer is it’ll still be a corker.

Oh, and, if you don’t warm to the character Blitzworm97, you’ve never been a father.