The opening of this movie features cityscapes and apocalyptic scenes overlain by an extended voiceover that it’s hard to resist the temptation to parody:

According to ancient mythology, in every generation, there are thirty-six individuals who carry the suffering of the world, and assist those in dire need. The thirty-six are amongst us all. Anyone you meet could be one of them. The world exists in the merit of these thirty-six righteous people. Without them, the world we know would fall into chaos, corruption and eventually darkness. To achieve this darkness, there are those too who have chosen evil over good. They are united by their leader, Lilith, and are all marked by the symbol of darkness. Once their mission on this earth is completed, they are destroyed, either by self-infliction, or by another Dark One. Damnation falls on the ones who do not choose to be evil and want to escape the wrath of Lilith. Lilith’s ultimate revenge is to destroy the thirty-six by choosing the same fate that their namesakes have immortalized. The final nine have been discovered. By abolishing them, darkness will reign over light. 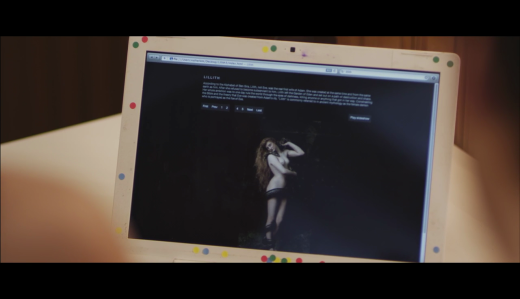 What you get when (at least in this movie) you google for “Lilith” — saucy, eh?

I’ve encountered the Hebraic mythology of the Lamedvavnik—the 36 righteous ones—somewhere before (don’t ask me where!), and it has always been my impression that the 36 are supposedly scattered around the world, unknown to each other and perhaps not even knowing their own status. In this movie things are changed a bit, with the assumption being that, not only do they know each other, but that, with a couple of exceptions, they’ve assembled together as a group. Also, they’re linked in to Christian, specifically Roman Catholic, saints, plus other biblical characters whose names they share—including Jesus.

It’s Hallowe’en. Almost exactly a year ago 27 of the 36 saints died in a plane crash near Montreal, the only survivor of the tragedy being a priest, Father Judas Neri (Tirelli). Seven of the other nine saints were off being presented with a humanitarian award at the UN; these seven young people are now studying at the swanky Academy of Royals in what I think is supposed to be END_OF_DOCUMENT_TOKEN_TO_BE_REPLACED