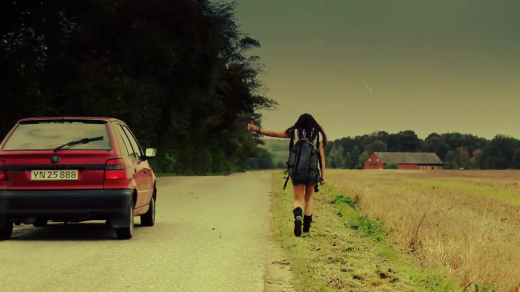 A short movie that, because of the extreme simplicity of the story it has to tell, relies on the telling rather than the tale, and in particular on the punch it manages to administer within its brief span.

Middle-aged Lars (Knudsen) can hardly believe his luck when, on a lonely stretch of rural road, he picks up miniskirted babe Paula (Zitelli) as a hitchhiker. As they prattle, she makes herself as alluring as possible to him—partially unbuttoning her blouse because of the heat, that sort of thing. Through rigorous self-control, he doesn’t quite drive into a ditch.

After he’s told her a little about himself he asks about her. Does she have a boyfriend? No. What does she do for a living? She chooses not to work; instead, she’s a collector: 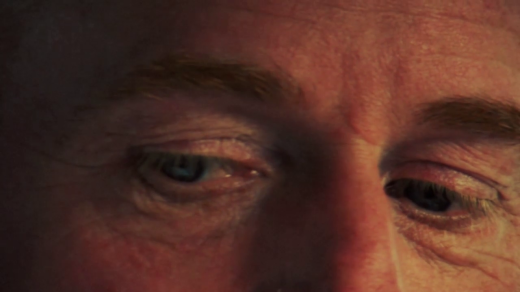 Per Knudsen as Lars

The color values are those of an old Hammer or American International horror movie: The subtleties are leached so that primaries dominate. Otherwise the cinematography, like the direction, is pretty pedestrian. Unfortunately the same has to be said of the acting: while Per Knudsen is perfectly adequate in the role of the man trying his damnedest not to be a lecher after youthful flesh, Lorena Zitelli’s performance is very stilted and amateurish, indeed borderline embarrassing.

The music’s pretty good, though. I enjoyed especially the opening theme, which has an amusingly Spaghetti Western feel, and wasn’t surprised to learn at the end that the piece’s title is “Desperados” (performed by the band Kowloon).