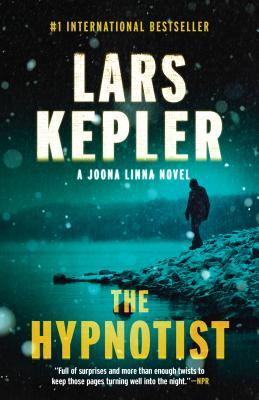 I went into this novel with very high expectations, based on its fascinating premise, but alas those expectations weren’t met. Certainly the pages kept turning at a good speed (which is fortunate, because the edition I read has five hundred and bleedin’ sixty-five of them) and certainly I was constantly interested to find out what might happen next, but, overall, crappy characterization and all sorts of plot flaws (would a mother really embark on an adulterous affair while the search is on for her abducted son?) kept hammering it home to me that this was a pretty mediocre piece of work.

Three members of a family — father, mother, youngest child — are brutally murdered, and a fourth, a teenage child, is found on the scene barely clinging to life because of his injuries. Joona Linna, a Finnish cop working for Sweden’s elite crime unit and a narcissistic ass on a Trumpian scale, discovering that the kid’s too sick to interrogate, calls in psychotherapist Erik Maria Bark to try hypnotism on the lad. Erik adamantly refuses: he swore a decade ago he’d never hypnotize anyone ever again. Even so, Joona finally prevails: the boy’s evidence might help save the life of his big sister, who doesn’t live at home and is presumably the next target of the crazed killer.

The result of the hypnotic session is not what anyone expected. Before too long, Joona and his colleagues are on the hunt for a vicious psychopath. And, soon after that, Erik’s young hemophiliac son Benjamin is abducted from the family home . . .

The two cases are obviously related in some way, but how? The answer, of course, can be traced back to the events of ten years ago that led up to Erik’s oath never to conduct hypnosis again. We eventually discover what those events were, in a flashback chapter (told in past tense rather than the present tense used somewhat uncertainly for the rest of the book) that extends to almost one hundred pages. Although purists may reckon this gambit breaks all sorts of narrative rules (shouldn’t the backstory have been interpolated in dribs and drabs?), I actually very much liked it: of all the aspects related to the actual telling of the story, it was the one I admired the most.

The finale happens in a remote area in Sweden’s far north, and has obviously been written with the movie in mind. While it’s actually quite exciting — at least, I found it so — it stretched my credulity to breaking point and beyond. I don’t want to give away too much about it, but a couple of wounded characters survive experiences that in real life would have killed them stone dead.

As indicated above, the characterization seemed to me to be flat-to-nonexistent, a major flaw in a thriller where you’re supposed to care about people’s fates. To an extent I could identify with Erik — which, as he’s the main viewpoint character (not, mercifully, the insufferably smug Joona), kept me going where otherwise I might have faltered. The only other character I much warmed to, the elder sister who escaped the family slaughter, unfortunately dropped out of the tale about halfway through. (I’m surprised she wasn’t woven back in at the end, just to tie off her story properly.)

In sum, then, there’s actually quite a lot of interest in this novel, and it certainly reads (in Neil Smith’s translation) very fluently. But, with so many excellent novels coming out of Scandinavia these days, I can’t see many persuasive reasons to return to Joona Linna’s world.