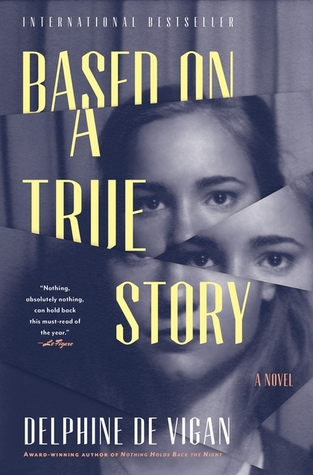 A slow-starting but eventually mesmerizing tale of writer’s block, identity theft, the nature of memory and the purpose of fiction. The fact that the narrator is a successful novelist called Delphine and is clearly based on de Vigan herself has led some to believe this is autobiography rather than fiction; my guess is that it’s fiction through and through but borrows a few peripheral details from real life. The London Daily Torygraph apparently thought the novel was “the next Gone Girl,” which only goes to show you can trust the Torygraph as much on books as you can on Brexit — i.e., not at all. No, less than that.

As noted, our narrator is celebrated Parisian novelist Delphine. In the wake of publicizing her latest novel, a bestseller, she’s floundering a little as tries to settle on what next to write. Into her life comes L., a woman of about the same age as herself and with a similar background (indeed, L. claims that they were in the same class at school, although Delphine doesn’t remember her) who works in roughly the same trade: L. is a highly regarded, much-in-demand ghostwriter. As Delphine’s hesitancy about her next project becomes a full-fledged writer’s block, to the point that she can no longer face a computer screen or even so much as hold a pen, L., who’s sort of an alter ego, is always there to help and encourage her. In fact, L. begins to take over her life and to try to turn her into a different writer . . .

So far, so orthodox — at least for this kind of novel. But as I was reading I began to realize that there were other interpretations — one of them of particular importance — that could be put upon the narrative I was reading. I don’t want to go into this in any detail, because to do so would be to risk wrecking the book for other readers — but I can say that the novel’s final page both confirmed my hypothesis . . . and seemed to dash it.

Based on a True Story is very slow to get moving, and at times early on I became impatient with this, although the quality of the writing (all praise to George Miller for his translation) kept me turning the pages. But I eventually came to realize that this lengthy, slightly turgid buildup was playing an essential role in stirring within me a sense of massive dread: What new humiliations were awaiting Delphine? Was she in danger of finding her selfhood extinguished? Had she already lost her identity to the seeming predator?

And also, because I’m a writer, there was the nightmare of Delphine’s block. You can bet I identified like mad with her on this.

With that slow, deliberate (and deliberately slow!) buildup, Based on a True Story can’t really be considered a thriller in the ordinary sense, and yet its third and final act becomes as thrilling as anything I’ve read recently. In it we see Delphine finally beginning to mount a rebellion against L. even as L.’s threat becomes ever more explicit. The novel’s concluding 100+ pages are decidedly edge-of-your-seat stuff. The trouble is that readers lured to the novel by the promise of “the next Gone Girl” may very well not have got that far.

This is a novel that, I’d say, demands your patience and then very richly rewards it. Because of its background and its themes, it was right up my street.