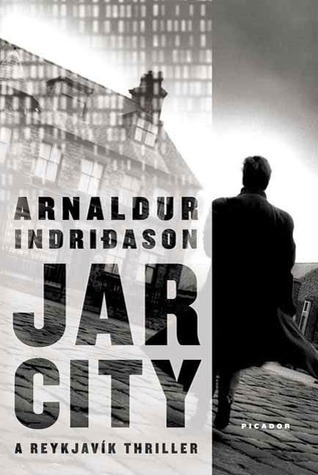 This is the third I’ve read in Indriðason’s longish Inspector Erlendur series: my first encounter with it, Silence of the Grave, left me distinctly underimpressed, so it was quite a number of years before I read another, Outrage, which I enjoyed very much more. In the interim I watched and was pretty bowled over by Baltasar Kormakur’s MYRIN (2006; vt Jar City), the screen adaptation of the current novel. And so finally I got to the novel itself, which I’ve had sitting on my shelves for more years than I care to think.

An old and solitary man is found in his basement apartment with his head beaten in. At first glance it appears like an instance of a burglary gone wrong, but someone — presumably the killer — has left a terse (just three words) and enigmatic note. Middle-aged Inspector Erlendur and his crew dig deeper to discover that the old man wasn’t the genial old duffer he might have seemed: in his youth he raped at least two women, perhaps more. Following some rather off-the-wall hunches and some clues that reveal themselves only through various characters’ DNA, Erlendur peels back the years to reveal some old, unsuspected crimes as well as the identity of a modern-day killer.

I found the novel really quite compelling. Luckily I remembered nothing of the movie beyond the fact that I’d liked it a lot, so my reading wasn’t spoiled by any stray memories. (I’ve now consulted my own description of it in my Comprehensive Encyclopedia of Film Noir and recall far more of it.)

There are a few rough edges to the book, though — aside from the translation, which is serviceable but at times somewhat clumsy. The fact that the enigmatic note is described in the opening page or so and then referred to a few times later but not actually revealed to us until halfway through the book is a pointless and profoundly irritating piece of manipulation by the author. There’s a subplot — a runaway bride mystery — that looks as if it’s going to turn into something pretty major but is suddenly, without ceremony, wrapped up offstage and seemingly forgotten about. There’s an early argument between Erlendur and his pregnant, junkie daughter Eva Lind that’s excruciatingly unconvincing. And the main plot relies not just on a matter of heredity but on what I’ll call a coincidence of pregnancy, plus some truly implausible flights of intuition on Erlendur’s part.

Despite all that, I was gripped from start to finish, and I admired both the imagination and the use of science as an integral part of the plot.

The title of the English-language edition, Jar City (the Icelandic title, Myrin, means The Mire or The Swamp), refers to medical collections of organs — kept in jars, geddit? — and by rather fuzzy extension to a genetic database that has been set up in Iceland to help research into exactly such matters as the novel’s plot relies upon. Erlendur seems rather resentful of the database on the grounds that it’s turning Icelanders into numbers (He is not a number! He is a free man!), but so far as I’m concerned it seems a great plan. The kind of research it’s conducting might have saved the lives of at least two of the characters in the novel.

Established 2008 — A fearless faith in fiction by Des Lewis — Employing an ‘intentional fallacy’ consciousness — Various passions of the reading moment — Walter de la Mare, ELizabeth BOWen, Robert Aickman and many others old and new — Please click my name in sidebar below for this site’s navigation and backstory.