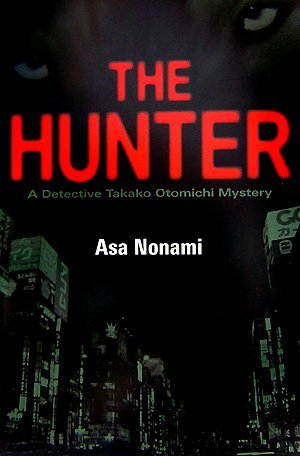 To use the term “police procedural” to describe this novel might be a little misleading, because the normal implication would be that this is a piece of realism. Yet the truth is that it is a police procedural and even that it’s arguably realism, in that there’s nothing inherently impossible here; it’s just that the m/os of the crimes are totally outwith normal experience, and the “weapon” used for most of them — a wolf-dog — is to say the least unusual.

Those m/os are uncovered fairly quickly and, since we’re given a little more information than the cops have, it’s not too hard to work out the culprit and motive for one set of crimes. That leaves us with the forensic pleasures of watching the cops and their procedures, the appeal of observing the evolving relationship between the two principal protagonists, and the genuine thrills of one longish section of the tale.

A man dies in a Tokyo diner of what appears to be spontaneous combustion, and the ensuing conflagration destroys the building in which the diner occupied the ground floor. It’s a baffling case, and the Tokyo PD deploys a major team of detectives to investigate it. Among them are Takako Otomichi, a motorcycle cop recently elevated to the detective division and one of the rare females in the department, and Tamotzu Takizawa, a crusty veteran detective. Of course, these two are partnered; of course, they spend much of the novel either not getting along or in a state of outright hostility; of course . . . no, in fact they refreshingly don’t fall for each other and into bed for mad passionate raptures, as would have assuredly happened had they been working in, say, Hollywood. By the end of the book and the dissolution of their partnership, they’ve dredged up a certain degree of liking and mutual respect, but that’s about it.

What’s also very refreshing about this depiction of a frosty relationship is that the frostiness isn’t entirely the older cop’s fault: Tamotzu is something of a misogynist, true, but not nearly as much or as deep-rootedly as Takako thinks he is, and her persistent refusal to react to any friendly overtures he makes — for fear of showing signs of weakness, you see — while in a way understandable is also a major contributor to the prickliness between them. In other words, each is guilty of stereotyping the other: she thinks he’s a chauvinist pig and he thinks she’s an irredeemable prig.

The other major character in the novel is the wolf-dog, Gale, with whom Takako soon very much identifies — at least, she recognizes in the dog the version of herself that rides wild and free on her motorbike, the independent Takako rather than the subservient cop. The longish thrill ride that I mentioned above relates a chase along the nighttime highways of Greater Tokyo, with Takako on her bike pursuing an animal that’s capable of cruising at 30mph and up.

Juliet Winters Carpenter’s translation is very good, and in places surprisingly colloquial (presumably in reflection of the original). But that didn’t stop me coming away from the novel with the feeling that all the things I liked about it — and there were quite a few — were colored (discolored?) by the sense of stodginess I experienced in parts of it. To an extent this was for the silliest of reasons — Kodansha’s edition has smallish type, narrowish margins and no page-breaks for chapter divisions, so the text can look pretty intimidating. But mainly it was because Nonami chose to include the boring bits of the police procedure — the lines of investigation that led nowhere, the meetings in which nothing was achieved, etc. — alongside the rest. This is of course realistic (as noted above) but unless it’s done by someone like Ed McBain, whose sparkling dialogue and turns of phrase distract your attention from the fact that not a lot has happened in the last couple of chapters, it doesn’t exactly make the pulse pound.

Even so, when I closed The Hunter I found myself making a mental note to look out for more by Asa Nonami. And I continue to be impressed by Kodansha’s crime fiction list.