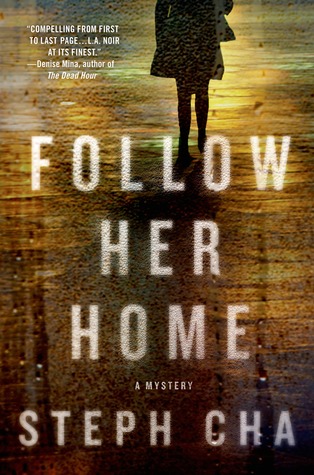 Juniper Song — generally called just Song — is a young single woman of Korean extraction living in LA and with a lifelong addiction to the works of Raymond Chandler, specifically the Marlowe novels. The opening few lines of this novel sold me on it, vibrant as they are with the timbre Marlowe’s voice:

It was about ten o’clock on a Friday in mid-July, the Los Angeles night warm and dry, the only wind rising from the whoosh and zoom of traffic on Rossmore. I was wearing a slinky black dress, black patent leather platform pumps, silver cascade earrings, and a black lambskin clutch. I was perfumed, manicured, and impeccably coiffed. I was everything a half-employed twentysomething should be on the sober end of a Friday night. [p1]

As Song takes on a seemingly simple task — her best friend asks her to see if his powerful dad’s making a fool of himself with a young Korean babe — and then discovers it’s far more lethal than she could have expected, the echo of Marlowe rapidly fades out, and after a few pages the style is more ordinary, even if punctuated by frequent references to Chandler/Marlowe and some vivid, albeit non-Chandleresque turns of phrase that Chandler might have admired:

The tower was shaped like a [cigarette] lighter by design. Even in the shadow of the US Bank building it stood massive and alluring, gleaming with promise. Find a big enough thumb, and I’ll light the world on fire. [p106]

Matching the prose style, the tale itself rapidly deserts all notions of being a Marlowe homage to become a far more orthodox contemporary mystery. At the same time, though, it’s bringing in a separate strand, in the form of Song’s backstory as she attempted, with eventually tragic results, to save her kid sister from the clutches of a sexual predator. Her theme here is not straightforwardly pedophilia, as you might expect (the sister would be of age in many areas, though not California), but the fetishization of, and predation upon, younger Asiatic women by older white men. It’s not a facet of society I’ve ever particularly thought about before, and Cha’s exploration of it, through Song, was revelatory.

The vitality of Cha’s prose leads her into some pitfalls. I noted several examples (as well as wondering what “the Buckingham Palace” was on p189), of which here’s just the first:

He sat there like a girl on a lawn and stared at me, inky pupils bleeding outward, threatening to tar out the green. [p94]

Such occasional hiccups were, I thought, a small price well worth paying for the general adventurousness of Cha’s imagery, whose richness rarely interrupted the narrative’s flow — indeed, Follow Her Home is an extraordinarily readable book. In places, too, it’s extraordinarily moving, too, because the themes that Cha touches on are often far from ephemeral: some of the pain feels very real.

I came away from Follow Her Home with oddly mixed feelings. I admired and enjoyed the novel greatly, yet at the same time it didn’t give me the Chandler fix I’d anticipated on reading those opening lines. That said, Cha took her novel in the direction she thought it ought to go and it’s beyond arrogant for me to suggest she should have conformed to other people’s (i.e., my) expectations! Taken for what it is, Follow Her Home represents a pretty smashing debut and a very promising series opener.