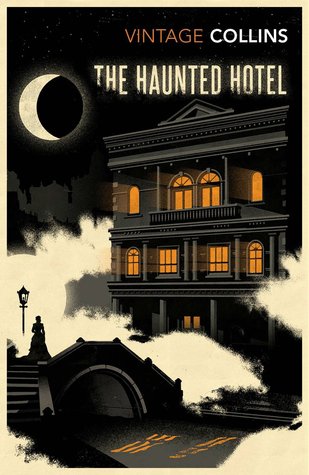 A Collins novel that’s deservedly among his lesser-known pieces yet is still thoroughly entertaining, this combines mystery with the supernatural to generally good effect.

All London is aghast when the highly eligible Herbert John Westwick, First Baron Montbarry, chooses to dump his long-time fiancee, the sweet Agnes Lockwood, and marry the Countess Narona, a continental of dubious reputation. Off the couple go on honeymoon, accompanied by Baron Rivar, supposedly her brother but, according to scandalized gossip, in reality her lover. By the time this odd trio settle down for a while in a crumbling palazzo in Venice, complete with an English maid and a courier, it’s widely bruited that the marriage is already on the rocks thanks to the countess’s presumed adultery and her husband’s extreme tightfistedness.

All of this we learn from the viewpoint of relatives and others back in the British Isles, notably Agnes, still steadfast in her love for Lord Montbarry, and Henry Westwick, a younger brother of Montbarry’s who has for long loved Agnes unrequited.

Lord Montbarry dies in the Venice palazzo, after the maid has resigned and returned to England and the courier has disappeared under mysterious circumstances. The countess and her brother, having collected the insurance money, head off to the US, where he dies of a fever. The palazzo is bought by a group of investors, including young Henry Westwick, to be converted into a swanky hotel. There’s a sense that everyone’s picking themselves up again after a tragic digression.

But then Henry spends a night at the hotel he co-owns, sleeping in the room where his brother breathed his last . . .

As I say, this novel is in part a murder mystery (although there’s no real detection involved) and in part a ghost story. The supernatural manifestations do help in the resolution of the riddle, so they’re not just tacked on; at the same time, the tale might have been stronger had Collins written it as an unadulterated mystery. That said, he knew his readership better than I do so that’s probably an asinine comment of mine.

Of especial interest is the portrayal of the countess. In the opening scene she consults a London doctor, seeking some sort of release from the evil she’s convinced inhabits her, and the destiny which that evil has charted out for her. (He tells her he can’t help.) It’s an intriguing conundrum: the sinner who seeks to rid herself of sin is surely no sinner, unless the concept of redemption is illusory. In other words, the countess is a femme fatale against her will, and, although she becomes an accomplice to crime, the blame for the tragedies that ensue from the marriage between her and Montbarry really lies at his feet, as we shall learn, rather than hers.

Back when I was in my late teens and early twenties I read most of Collin’s novels thanks to the efforts of the London publisher Anthony Blond, through his Doughty Press, to bring a bunch of them back into print; the excellent St. Bride’s Library, near where I worked in Fleet Street, stocked not just those but a number of Collins’s other works. More recently I’ve reread The Moonstone and The Woman in White with great enjoyment, especially the latter. I’ve kept meaning to read/reread more, but it’s only now, with The Haunted Hotel, that I’ve actually gotten around to it. I was pretty certain this was one of the ones I hadn’t read before; I’m now even more so. As noted, it’s very decidedly a lesser work and has some highly visible flaws. Yet I found it a compelling read — a great shocker! — and enough fun to encourage me to dig out some more of Collins’s books (thanks, Project Gutenberg!) to read in the not-too-distant future.