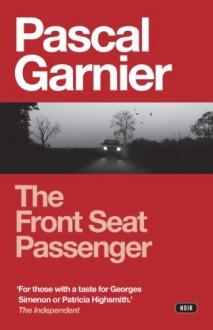 When Fabien’s wife Sylvie dies in a car crash, Fabien isn’t too devastated: it’s been a while since he and Sylvie last felt anything for each other beyond amiable but remote friendship. He’s horrified, though, to discover she had a passenger in the car with her who also died, Martial, the married lover with whom she was returning from an assignation. It seems to Fabien that the only way to make things right is for him to track down Martial’s widow, the pallid, ineffectual Martine, and seduce her.

In this he succeeds, as we expect him to. But from that point onward, just when we reckon we’ve heard this story before and know where it’s going, the plot becomes increasingly unpredictable.

Which is great for readers of the book but lousy for people trying to talk about it. How can I do so without committing spoilers in all directions?

So all I can sensibly say about The Front Seat Passenger is that Alfred Hitchcock should still be alive in order to film it. This short novel bears all the hallmarks of Golden Age Hitchcock, complete with unlikable protagonists, unlikely humor and sudden plot-shifts. I also very much liked the writing style (as translated by Jane Aitken): it has a readable directness that makes its sudden flashes of acute observation stand out all the more. Here’s a single sample:

Martine had a strange little voice that put him in mind of a child learning the recorder.

The book’s short enough to be easily read in an evening — which, since it’s hard to put down once started, is what you may very well end up doing.