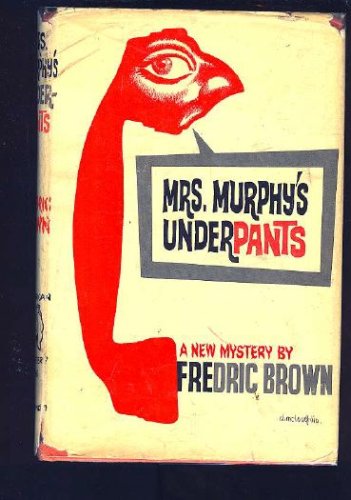 I admit it: aside from the fact that I’ve enjoyed Brown’s work before (in both of his main genres), it was the title that drew me to this one — that and some recent relevant badinage between myself and fellow Goodreadsers Col and Kathy.

This is the seventh book in Brown’s series featuring the nephew-and-uncle PI team of Ed and Am Hunter, and it’s an amiable outing — little more than that.

One night Ed wakes to discover that almost-eight-year-old Mike Dolan has sneaked into the Hunter apartment and is trying to steal his gun from his dresser. Ed throws on his clothes and takes Mike home to the boy’s family, headed by syndicate boss Vince Dolan. Mike claims he wanted the gun because he heard two men plotting to kill his dad. Nobody believes him, but next day Dolan hires the Hunters to solve the mystery of a pair of burglars who broke into the house, stole nothing, but gave a black eye to Mike’s much older stepsister Angela — whom Ed, fast worker he, has already bedded, something Vince fortunately doesn’t know.

There then follows quite a lot of desultory detecting on the part of the Hunters, some of which seems relevant and some of which seems like plain padding, but all of which is pleasingly readable in the usual Fredric Brown fashion: my pulse didn’t pound and my knuckles didn’t whiten, but I don’t think Brown especially wanted them to. There is, after all, no murder.

The solution to this shortish mystery novel comes as no great surprise to someone familiar with the tropes of noir; maybe it takes the Hunters so long because of the amount of hooch they — and just about everyone else involved — habitually knock back.

All the time I was reading Mrs. Murphy’s Underpants (the italics are important there), I had the vaguest of feelings I’d read the book before, although you’d have thought I’d have remembered the title.

Oh, yes: that title. It comes from a silly rhyming game the Hunters play that involves rhyming couplets of the form “Who put the severed head in Mrs. Murphy’s marriage bed?” The book’s final pair of contesting couplets has one of the two Hunters finding a rhyme for “underpants.”

I see that the title of the French translation of this novel is Les Dessous de Madame Murphy, which would make the rhyme-word throughout “Murphy.” Good luck to would-be rhymesters with that one.