A dangerous criminal—a member of the infamous Checkers Gang—breaks out of prison and, in stealing a farmer’s horse and gun, murders the farmer, Matt Random (Agar), in cold blood. Matt’s identical twin brother Luke (Agar again) sets off to hunt down the killer, his only real clue being that the stolen gun was a very unusual model, one of a pair given by their deceased father to the two sons.

One day Luke comes to the rescue of a Havasupai Indian woman, Wild Willow (English), who, while bathing in the river, has been murderously attacked by the white man she’s ditched, Pete Longo (Van Sickel), another member of the Checkers Gang. Luke is getting the worse of his fight with Longo when suddenly a shot rings out and Longo drops dead. The marksman responsible is Stacy Doggett (Connors), who announces he’s on a mission to kill all the members of the Checkers Gang.

Luke (John Agar) and Willow (Marla English): meant to be.

It’s pretty obvious to us as audience that Stacy is a smiling sociopath, but Luke’s a simple soul and takes the man’s offer of friendship at face value—despite being warned against Stacy here and there throughout the movie by just about every other member of the cast:

Willow: “Stace! He has a small spot of goodness in him that grows smaller each day. Soon it will be gone, and he will be like an animal.”

Having established, much to Stacy’s chagrin, that Willow is a hands-off area to both men, the trio set off for the town of Red Butte. Along the way they team up with snake-oil salesman and trick shooter Windy Wagonwheels (Hatton), his supposedly prim daughter Rena (Meadows) and his assistant Lola (Monay). Rena is in fact having secret trysts with Cale Tanner (Duncan), a leader of the Checkers Gang. Lola’s role in the plot seems primarily to canoodle with Stacy, thus offering us contrast between this lascivious pair and the tight-jawedly chaste Luke and Willow, who have fallen head-over-heels for each other but are being doughtily stiff-upper-lip about it.

That is what is called a literary device, see?

Rena (Joyce Meadows), the snake-oil salesman’s daughter, is not so demure as she seems.

Overall, the screenplay is less than Shakespearian, the dialogue in particular being often creaky and not helped by Agar’s cardboard rendition. In addition, poor Marla English, as the Havasupai woman, is stuck with what presumably the scripters thought was pretty high-clarse dialogue but that comes across to us today as borderline Yoda:

Luke: “You’re beautiful.”
Willow: “I am not trained in the ways of your white sisters, but I wanted to hear you say that.”

Hatton has a few good lines as Windy, though; maybe they belong to the “additional dialogue” (by Lou Rusoff and helmer Edward L. Cahn) referred to in the opening credits:

Windy: “I warn you, I can shoot the eyes off of a cockroach at two miles. Three, if I happen to be sober.”

Windy: “My mother trusted my father, and look what happened. Me.”

Windy: “And now, friends and neighbors, I can’t tell you what Windy’s Wonder Water will do for you, but I guarantee you it’ll make giants out of midgets, men out of boys, and ravishing women out of lonely spinsters.”

I was led to this movie by a reference I came across to it as a noirish Western. I know very little indeed about Westerns—it’s a genre I’ve never much gotten into, thanks to a youthful propensity to run shrieking from the cinema any time John Wayne appeared on the screen—but I’m slightly bemused by this one’s being singled out as noirish: it seems to have all the standard attributes of the Western, to wit lots of shooting (the Checkers Gang will have an empty clubhouse in future), a fair amount of fisticuffs, injuns, etc. 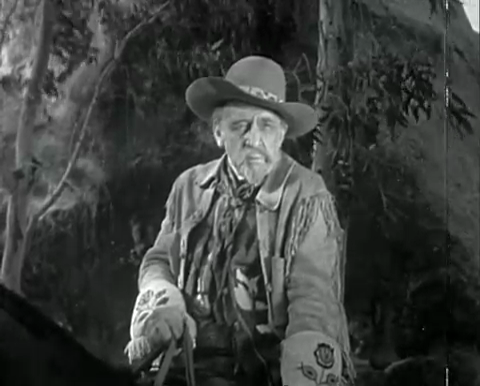 Those injuns appear only very briefly in order to carry Willow off and tie her to a stake on top of an anthill. According to the script, this was appropriate treatment for any Havasupai woman who consorted with a white man. Apparently the sequence was written into the screenplay because the producers had already commissioned and paid for the poster, which they thought was true fab (you can see their point) but had nothing to do with the movie as originally scripted.

Although that sequence has a racist veneer to it—Native Americans portrayed as sadistic savages, sort of thing—the movie as a whole, to its credit, uses racism as a clue to evil. Clearly to our hero, Luke, the fact that Willow is a full-blood Havasupai is no obstacle to the love he feels for her, and vice versa. The only person who really has a racist attitude toward her is Stacy: he’d bed her in an instant, given the opportunity, and at one point does attempt to force himself on her, but otherwise, so far as he’s concerned, she’s “just a ’breed woman.” 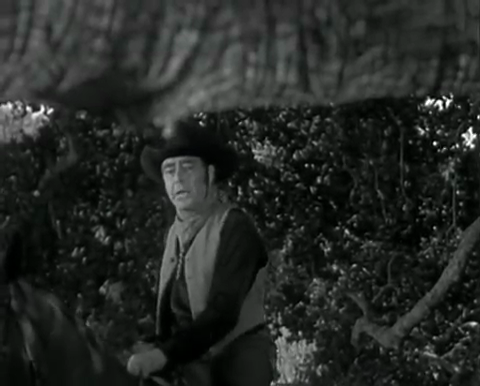 More disturbing in a way is the attitude our characters have toward killing people. We know that Stacy is a psychopath, so it’s no surprise that he greets the demise of each new victim with a happy laugh. But Luke and Windy, who’re supposed to be the empathetic characters, respond similarly. Yes, the people they’re killing are members of the villainous Checkers Gang and intent on killing them, but the taking of a human life, even under those circumstances, isn’t a cause for hilarity. The attitude simply doesn’t ring true. Perhaps the idea was to distract us from the movie’s alarmingly high body-count.

Marla English as Willow with Raymond Hatton as Windy.

Mike Connors, credited through most of his early career as either Touch Connors or Michael Connors—went on to star as Joe Mannix in the TV series Mannix (1967–75), the role for which he’s best known. UPDATE: Connors died, alas, on January 26 2017, less than a month after I posted this piece.

John Agar was Shirley Temple’s first husband; he starred mainly in B-movies of the ilk of The Mole People (1956) and The Brain from Planet Arous (1957), far too many of which I’ve seen. Marla English’s very brief career lasted just from 1954 to 1957; in the latter year, aged 21, she gave up the screen in favor of her second marriage, to businessman A. Paul Sutherland, to whom she remained wed until her death in 2012.