A short movie about an exceptionally unpleasant individual that I found myself enjoying far more than I expected I would.

Giovanni (Fernandez) is a vicious little skinhead thug who makes his living out of beating up defenseless victims for hire. Lately he’s been becoming more and more unstable, in large part because he doesn’t know how to cope emotionally with the fact that his mother (Palombi) is sick, bedridden and perhaps dying: it’s part of his ethos as a tough guy, he feels, to pretend he doesn’t care, and to retaliate—even against his mother—furiously whenever anyone suggests he might. Violence is his easiest response to any circumstance, and the same seems to be true of the milieu through which he moves.

There’s a suggestion, too, in the movie’s opening sequence, that he’s ambivalent about his own sexuality.

His boss (Longobardi) tries to get it through to Giovanni that he’s becoming a loose cannon, a liability, and needs to get a grip on himself. Giovanni’s lifelong friend Gabriele (Di Vivo) tries to make the same point but is pushed away amid a tirade of oaths.

Umberto Longobardi as the Boss

Because of the movie’s title, we know going in that there’s going to be an execution, but of whom and by whom remains an enigma right up until the movie’s very last moments.

L’Esecuzione won the David for Migliore Cortometraggio (Best Short) at the 2013 David di Donatello Awards. I’m mildly surprised it hasn’t picked up a few more accolades along the way. 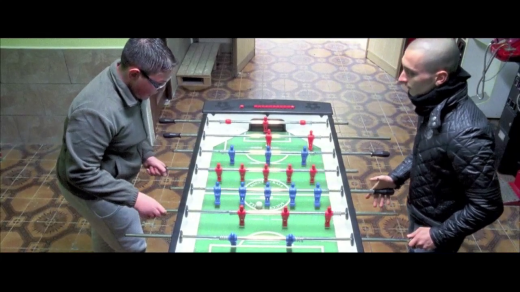