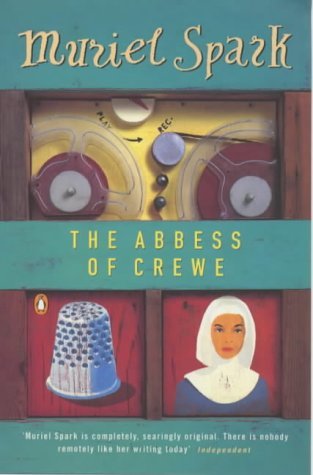 A short and often very funny satire of the Watergate affair, published a matter of months after Richard Nixon’s precipitate departure from the White House. Here the malefactors are transformed from middle-aged oathly US male politicians to become the similarly aged occupants of a fictional convent in Crewe.

The convent is unusual for a Christian religious community in that among the texts underpinning the sisters’ lives are not just the usual holy writings but also textbooks on electronics and the like. For Sister Alexandra and her mentor, the Abbess Hildegarde, have made it their business to bug virtually every part of the building and its grounds. This surveillance, and the tapes made therefrom, will surely help Alexandra and her cronies, Sister Walburga and Sister Mildred, see Alexandra elected by the nuns as the new Abbess following Hildegarde’s death.

And sure enough this comes to pass, although there’s a rival for the position in the form of Sister Felicity, who preaches free love and is indeed practicing it frequently and raucously in the orchard with a studly local Jesuit, Father Thomas, and not making too much of a secret of it. That fact alone might seem to bar Felicity from election, but the younger nuns are quite keen on an electoral platform that has free love as one of its planks. And so Alexandra, Walburga and Mildred plot and scheme.

It’s the theft of Felicity’s thimble that starts the chain of events leading to her downfall, but that same chain of events will also lead to an international scandal, one that Alexandra, despite her glamor and her undoubted oratorical skills, will be unable to keep confined to the abbey . . .

More novella than short novel, The Abbess of Crewe can easily be read in a sitting. I found myself chuckling often, and even laughing aloud a few times, at the manipulations of Alexandra and her co-conspirators as well as the antics of their boneheaded dogsbody Sister Winifrede and the convent’s peripatetic Sister Gertrude, flitting from one remote part of the world to another as she solves grave political problems and brings peace to warring peoples.

The only tiny fly in the ointment, for me, was Spark’s use of tense in her telling. This seemed to wobble around a bit in a manner I found distracting. But with the witty lines and the jokes coming so thick and fast, that was a very small complaint.