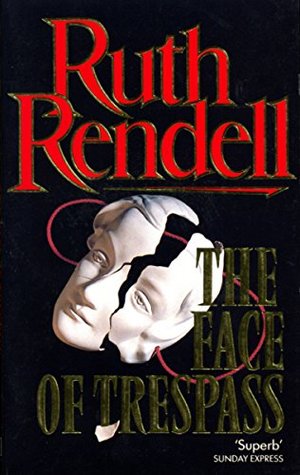 Ruth Rendell’s earlier novels, especially those in her Wexford series (but let’s not forget Master of the Moor), can be a bit of a lottery, but this one, The Face of Trespass, is a tautly told winner.

Gray Lanceton wrote a successful novel but then, because of the onset of a torrid love affair with the married Dru Janus, went into a prolonged bout of writer’s block. The block became worse a few months ago when he split up with Dru over her insistence that they should plan to murder her hugely wealthy older husband Tiny and live the high life on her inheritance. Now Gray lives in a rundown shack in Epping Forest, wondering where his next meal will come from, hoping the phone will ring and Dru propose a reconciliation while also hoping it won’t.

Then comes the news his mother his dying . . .

The Face of Trespass is a portrait of obsession — for Gray’s infatuation with Dru is nothing short of that — and of victimhood. At any fork in the road of life, Gray has a tendency to make the wrong choice. Even worse, when the right choice faces him straight on, he still turns reflexively away from it. He’s a born sucker, a sap, one of those natural victims that con tricksters can spot a mile off.

If the novel has any demerit it’s that Gray is such a ninny that he sometimes becomes irritating: I quite often wanted to pick him up and shake some sense into him. At the same time I recognized quite a lot of myself in him, and so could hardly help but grudgingly like him for that reason.

The story’s final resolution is perhaps a tad contrived but it still worked for me: as I read those last few pages I kept realizing how lots of minor incidents that I’d barely noticed as I’d read about them earlier in the novel in fact dovetailed in beautifully with each other to give, at last, the true explanation of events.

In later years Rendell might have taken twice the number of pages to tell this tale (especially if writing as Barbara Vine), and sometimes the greater expansiveness worked in her favor. Here, though, I enjoyed the relative spareness of her prose — indeed, I think that overall The Face of Trespass may be the best written of her novels that I’ve read, which is saying something.

This is my last post for 2019. Happy New Year everyone! May 2020 bring you all that you dream of, or at least more than you deserve.