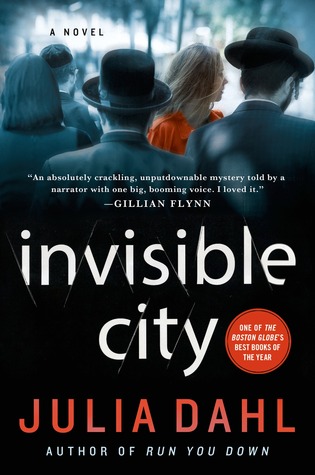 Rebekah Roberts is a stringer for a downmarket NYC rag. When a woman’s naked body is discovered in the rubble of a building site, Rebekah happens to be the reporter given the story.

It has particular resonance for her. The dead woman is from Brooklyn’s secretive Hasidim community. Rebekah’s mother was from this same community: rebelling against its strict rules, she ran off to Florida with Rebekah’s (Christian) dad, had Rebekah out of wedlock, then ran back home, deserting her lover and child. So Rebekah has a sort of reflexive hostility toward the community while at the same time being attracted to an exploration of it in hopes she might reveal clues as to what made her long-lost mom tick.

Rebekah muddles around in the case, not really doing any productive detecting and at the same time revealing herself to be a pretty incompetent reporter. In fact, her (pretty scanty) deductions lead basically nowhere, the murderer being revealed at the end not through any effort of hers but through one of those “I’m nuts! I’m bonkers! I’m both!” scenes in which the guilty party confesses everything while preparing to knock off the detective. Who’s saved at the last moment. Of course.

I found Invisible City moderately entertaining, an easy enough way to pass the time. However, I decided I didn’t much like Rebekah, which kind of put a damper on things; at the same time, though, I did like the character Saul Katz, a Hasidic ex-cop who takes Rebekah under his wing while also quietly using her to further his own agenda. But where I was really disappointed in the book concerned the very reason I’d picked it up in the first place: to learn more about the Hasidim. (Yes, I realize it’s unfair to expect a mystery novel to be educational, but there ya go.) By the book’s end I felt I’d been presented with a reasonable amount of information about the Hasidim, but at the same time I was still very much on the outside looking in. It’s only in the last few pages, when a Hasidic patriarch who up ’til now has been portrayed as a monster opens up to reveal himself as someone far more benign, that I felt I was getting any real insight.

From the review quotes on the cover and from the awarda nominations the novel has received, I know that many others have been more enthused by Invisible City than I was. For me it was a perfectly okay crime novel, a good read in its modest way, but not the groundbreaker I’d been hoping for. It’s beans on toast for breakfast rather than smoked salmon.