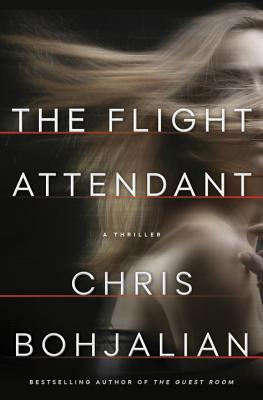 Cassie Bowden, fast approaching forty, is an alcoholic long-haul flight attendant with a bad habit of having one-night stands at the stopover points with male passengers. One morning she wakes in Dubai with a splitting hangover to discover that the man in bed beside her is dead, his throat slit while she slept.

Could she have killed him herself? She doesn’t know for sure, although she’s pretty certain she didn’t. But in that case who did?

Rather than risk getting arrested in Dubai, she does all her incompetent best — and Cassie is a world-beater when it comes to incompetence and stupid decisions — to cover up any traces of a connection between herself and the dead man. Here her job comes in handy: she’s most of the way back home to New York by the time the body is discovered. But she’s not going to escape involvement for long. The FBI are sniffing around her, and the press have got hold of CCTV photos of her at the Dubai hotel. Yet more alarmingly, whoever it was who inexplicably spared her life is now almost certainly on her tail, preparing to finish the job.

This is a slow-moving book, and I’d suggest an overwritten one: we seem to be told some things — about Cassie’s binge-drinking and promiscuity, for example — over and over again. And I became a tad fed up with a plot that started off as a gripping murder mystery (with a setup reminiscent of that in Sidney Lumet’s much-liked-by-me 1986 movie The Morning After, starring Jane Fonda) and then morphed into an international spy yarn with creepy Russian oligarchs, the FSB, the CIA, double agents, a chemical-weaponry connection and more besides. By the end of it, I was still not entirely clear what everyone’s motivations were: I think the Russians were after the secrets Cassie’s brother-in-law, a chemical-weapons dismantler with the US military, might be persuaded to leak, except they didn’t seem to have made any attempts to squeeze the info out of him.

I’ve said the book moves pretty slowly, which I don’t regard as a demerit. In the last few chapters, though, lots of bits of action start tumbling over each other, there are sudden twists of perspective (some people turn out to be not who we thought they were) that struck me as being far too contrived to be effective, and then we have an ending of great gooiness and such implausibility that it bust my credulity meter.

I’m sorry if the above seems unduly harsh. For the vast majority of the time that I was reading The Flight Attendant — say 85 or 90% — I was enjoying it, even while I found the writing a bit cumbersome and the plotting a bit Dan Brown. It was only in the final stages that I began snorting with annoyance.

I gather that Bohjalian’s books have the refreshing — indeed, admirable — characteristic that each is distinctly different in kind from the last, so I may very well try him again. I have his Trans-Sister Radio somewhere on the shelves.

2 thoughts on “book: The Flight Attendant (2018) by Chris Bohjalian”