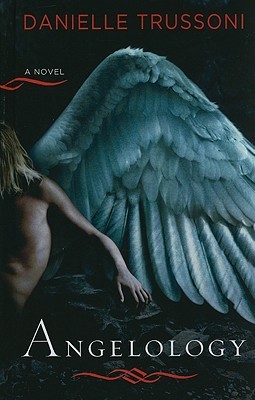 The premise of Angelology is that, sometime after the Flood (which, according to this book, was an historical event), many of the Fallen Angels bred with human women to produce the Nephilim, which can pass among us as human if they want to but at other times reveal themselves to be much bigger than us, inhumanly beautiful and radiant, and winged.

(I’m not, I confess, quite sure of the mechanics of this aspect. Are they shapeshifters or illusionists of some sort? And, while I can accept they can fold their wings away invisibly into their backs, I’m still trying to work out how they can suddenly spread them while fully dressed without shredding their clothing. But I digress.)

For centuries and centuries, the Nephilim have been working to overthrow and rule/enslave the human population of the world, and for just as long sekrit societies of angelologists have been working toward the Nephilim’s downfall and extermination. Sometimes the Nephilim ally themselves with particular groups of scumbags, like the Nazis (Hitler’s lot, not the current toads). They’re of immense cruelty and take pleasure in killing. However, they’re aware their species is declining in a sort of genetic deterioration that could be reversed only the plucking of a sacred lyre that was lost for centuries in a gigantic cavern in Bulgaria, a cavern where some jolly important angels — I think they’re the Nephilim’s parent angels but I’m not sure — have been held in cages since earliest days.

No one, least of all the Nephilim, knew where this cavern was except the locals and those tourists who came to the cave-mouth to listen to the voices of the angels emanating from the depths — nobody officially knew except a medieval monk whose expedition to discover it killed him and then, a millennium or so later, in 1943, a party of angelologists who retrieved the lyre and smuggled it from war-torn Europe to New York, where Abigail Rockefeller and a prioress hid it somewhere in the city.

Okay, so now it’s the present day, and both angelologists and Nephilim are closing in on the lyre. Whoever gets it first will have an enormous advantage in the secret war that’s been raging, op. cit.

This is a very long book — far longer than the page-count would suggest because the print’s eye-throbbingly tiny (I eventually jettisoned the Penguin paperback I’d bought and borrowed a large print copy from the library) — and in parts of it there are great scads of exposition, often rendered in the form of unconvincing dialogue/monologue. A lot of the writing is pretty pedestrian: “I felt the sharp decline in the floor as we walked and adjusted my weight to bolster myself” (p431), for example. It’s a neat trick if you can do it.

I could also pick on various bits of plotting. Yes, yes, the whole premise is implausible, but within that context plausibility should be maintained. Yet, for instance, the highly security-conscious New York chapter of angelologists give their cars vanity plates like ANGEL1 and ANGEL27, because the hyperintelligent Nephilim are never going to cotton on to that, are they?

As another example (among many), during a tense standoff between a bunch of the goodies and a horde of the baddies, a goody is able in plain sight but unnoticed to swiftly reassemble the component parts of the lyre, even to the point of tuning its strings. This might be just about credible if that were a ten-second task, but of course it wouldn’t be. We’re being asked to believe that for twenty minutes or more the standoff just sort of went into stasis while the character struggled to put the instrument together. And tune it.

That instrument, by the way, is made of very special stuff:

[The lyre’s] body was made of a metallic material that is closest to platinum, an element that has never been classified and cannot be considered an earthly element. (p605)

Either Trussoni (or Trussoni’s editor, or both) doesn’t know what the word “element” means or they don’t realize that the Periodic Table isn’t just a convenient mnemonic, or some such, but an array of all the possible elements allowed by physical law. Any further elements that could be added to it would be of higher atomic number and thus of extreme radioactivity and a halflife measurable in milliseconds or a fraction thereof. So the idea of having another element that’s a bit like platinum is just silly, unless you know how to change the physical underpinning of the universe.

For the most part the book moves with devilish slowness, but then its final sections suddenly devolve into a Dan Brown-style feverishness of action as our friends set out to recover the bits of the lyre from various locations in New York. They’re guided in this by Dan Brownish riddles, too; you almost expect Robert Langdon, symbologist, to come leaping out of the wainscoting with a cry of “Aha!” It all gets to be very silly. And the pacing becomes so hurried that the deaths of even characters we’ve invested a lot of emotional coinage in just sort of happen, and seem almost forgotten in the following line, as if no one, including us, should give a damn.

All in all, then, the book’s a hell of a mixed bag, with some of its strong points — such as the initial premise — crippled by pallid characterization, moments of risibility and often clunky prose. Just to compound its sins, it ends in a cliffhanger that’s supposed to make us rush out and buy the next portion of the unfinished tale. I’m always unamused by such exploitative gambits: If a book is incomplete we should be warned of this on the front cover, not discover it on the last of several hundred pages.

But never mind my quibbles. I gather the book’s been sold into dozens of foreign-language editions and was a bestseller here (with a movie, currently stalled in production, on the way). You’ll find lots of very positive reviews around, so please feel free to ignore this old grouch.