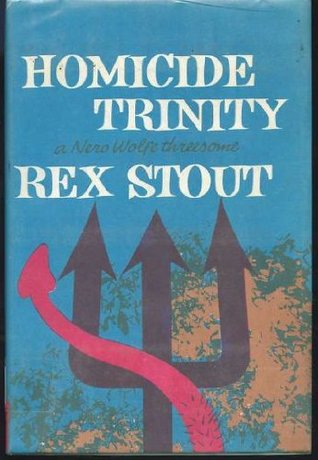 I was recently reading a rave about Rex Stout’s Nero Wolfe stories on the blog of a crime-fiction enthusiast whose views I regard highly, and it reminded me it’s been quite a few years since last I read any Stout. Yes, I know he’s a darling of the critics, but for some reason I’ve never been able to regard his work highly.

So here I am with Homicide Trinity in front of me, attempting to mend the error of my ways.

It’s a collection of three novellas, and between them the three reminded me of why I’ve never been able to get overly enthused about Stout’s fiction. It’s not that I dislike the character of Wolfe (although I do), it’s that the necessarily circumscribed arena in which much of the main action takes place — Wolfe’s NYC house, because he refuses to leave it except under duress — and the similar limitation on the action itself, Wolfe being a man of inviolable habit, mean that the stories tend to be a bit samey. That’s certainly true of the first two stories here, in which a small cast of suspects find themselves being interviewed by Wolfe, the guilt of the relevant party being revealed through their responses.

Somewhat the same template is observed in the third story, “Counterfeit for Murder,” yet for some reason I enjoyed it far more — perhaps because in it Archie Goodwin, Wolfe’s Watson, discovers that he can like a woman who isn’t young and short of skirt. The woman concerned, Hattie Annis, is the scruffy middle-aged owner of a downtown boarding house where she lets rooms to theatrical types, charging them rent if they can afford it, and she’s discovered in her little-used parlor a stash of counterfeit money. The solution to the mystery’s a bit crapola, to be honest — and flies, for no explained reason, into the teeth of an earlier-planted clue — but the character of Hattie is so glorious that I didn’t much care. Pfui, in other words.

So, read this for “Counterfeit for Murder,” is my advice. The other two are pleasant enough pieces, but hardly essential reading.