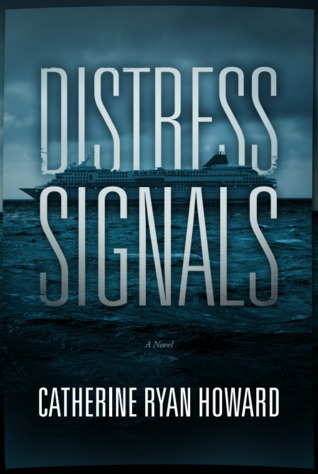 A few months ago I read and raved about Catherine Ryan Howard’s second novel, The Liar’s Girl (2018), and promptly resolved to read her first. As is my wont, I left a period of grace between the two books (and will do so likewise between this one and her just-published third outing, Rewind). To cut a long story short, Distress Signals is excellent, and a major reason why my eyes are currently burning from lack of sleep.

Cork native Adam Dunne is a wannabe screenwriter whose time seems finally to have come. He’s settling down to do the hurried rewrites on his first big sale during the absence of long-term girlfriend Sarah on a work trip to a conference in Barcelona. The only trouble is that, as he soon discovers, there is no conference in Barcelona, and her employers think she’s at home with a stomach bug. As Sarah drops completely off the radar, failing to answer texts or voicemail from Adam or anyone else, her best friend breaks the news to him that Sarah went off on a secret romantic adventure with another guy.

Panic sets in when Sarah fails to return. All that arrives is her passport, through the mail, with a simply message inside it: “I’M SORRY — S.”

Adam’s desperate quest to try to find out what’s happened to Sarah — to find out if she’s even still alive — introduces him to the murky world of crime aboard cruise ships, where the major operators can and do keep crimes up to and including murder out of the public eye for fear of alienating potential future customers. He allies himself with Peter, a man whose wife a year ago went missing in circumstances strikingly similar to those of Sarah’s disappearance, and together the two men travel as undercover detectives on a cruise aboard the Celebrate, the flagship of the Blue Wave line. Over and over again Adam will have the scales dashed from his eyes as a series of dreadful crimes is uncovered . . .

Howard cannily doles out the various revelations of her plot with what seemed to me near-perfect timing, so that they came as surprises but not as in any way cheats: the clues were there for me to deduce, had I been astute enough, each twist just before its disclosure — and in a couple of instances I did indeed come deliciously, tantalizingly close to getting there first. In addition, there’s a separate subplot that seems to be leading us in a completely different direction, toward an “obvious” killer; I fell into the trap of believing this just had to be a red herring . . . which it isn’t, not entirely.

As with The Liar’s Girl, I was amazed by the sheer quality of Howard’s writing. There’s a magnificent fluency to it that both transcends genre and is especially well fitted to the service of suspense fiction. The novel had me reading sickeningly late into the night — I had a bad attack of the “just one more chapter” malady — and it did this two nights running, so in a way it was as much with relief as with reluctance that I got to the (very satisfying) conclusion.

Distress Signals offers a twistier, more baffling mystery than The Liar’s Girl — I was reminded of the work Harlan Coben did in his pomp (with novels like Tell No One) — but it didn’t have quite the same fascination for me as Howard’s sophomore effort, I think possibly because The Liar’s Girl sticks closer to home, so to speak, weaving its mystery and uncertainty from more commonplace threads. But, really, neither novel is better or worse than the other: they’re both outstandingly good.