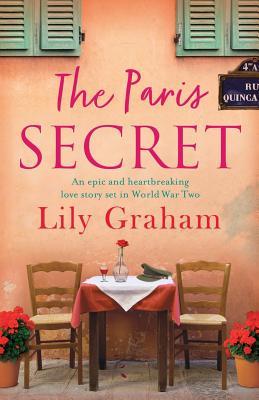 A novel that has quite a lot wrong with it yet that I nonetheless found infectiously charming, in the same way that I can be rendered damp-eyed by a Hallmark Channel movie even at the same time as recognizing it as absolute schmaltz. Of course, anything that’s set in a little Paris bookshop is likely to appeal to me . . . with the notable exception of, oddly enough, Nina George’s The Little Paris Bookshop, which I disliked quite a lot.

But back to The Paris Secret.

Short introductory and closing chapters are set on a train to Paris in the here and now, but the novel is primarily set in Paris much earlier, its two related plot-lines being dated 1962-3 and 1940-42, with the latter strand having as backdrop the Nazi occupation of the city. Graham achieves the melding of these two strands very neatly — overall, in fact, I was much impressed by the skill with which this novel is constructed.

In 1962 young Valerie discovers a job ad for a live-in assistant in the bookshop owned by the grandfather she’s never met, Vincent Dupont. At the end of the war, you see, the infant, orphaned Valerie was at Vincent’s insistence rescued from Paris by her second cousin, who raised her in England alongside her own kids. Rather than simply tell Vincent who she is, Valerie, now a trained librarian, adopts a pseudonym, and applies for — and gets — the job as if she were a stranger. (This is all, you might fairly argue, pretty goddam implausible, but then you could say the same about the premise of, for example, Gone Girl.)

Vincent’s a grumpy old sod and his running of the bookshop is idiosyncratic (it’s a marvel he’s still in business), yet he and the nervous young woman he’s employed establish an accord. In this they’re helped by the florist from next door, Clotilde Joubert, who clearly adores Vincent in a daughterly, eye-rolling way, is likewise loved by him although he’d never admit it, and who immediately befriends Valerie. It’s not long before we learn that Clotilde quite quickly spotted Valerie for who she really is.

In dribs and drabs, Valerie manages to tease out of her grandfather and Clotilde what actually happened in Paris twenty-plus years earlier, the fate of her mother, Mireille, and father, Mattaus, and why Vincent thrust her out of his life . . .

The author acknowledges in her afterword that she tweaked a couple of historical realities for the sake of her plot — which is fair enough — but I gather there are far more factual errors in the text than she admits to, right down to someone shopping at a supermarket nearly twenty years before such a thing existed in France. Since I didn’t notice these — I’m no historian (outside science history, if you’re being charitable) — they didn’t bother me, although some oddities did bring me up short. For example, there’s a nasty Nazi called Valter, which I don’t think is a real German name; it is, however, the German pronunciation of the name Walter. Valerie’s father’s surname (and thus, although she doesn’t know it, her own) is Fredericks, where surely it ought to have been Friedreichs. That sort of thing.

Still, I’m sure there’s no such place as the European kingdom of Bratisvlania, which is where the widowered prince, egged on by his cute daughter, falls in love with and marries the feisty Brooklyn governess whom the older members of the royal household so overwhelmingly despise in that Hallmark Channel movie I was talking about.

So I forgive the overwhelming implausibility and the factual gaffes. What next?

What I found I couldn’t forgive was the clunkiness of the writing. Over and over again I was wincing at what I saw on the page in front of me. (And that’s before I get started on the proofreading. At one point we discover that the sun was shinning.) If ever a book required a final copyeditorial polish, The Paris Secret is it. Just one example, from page 165: “A muscle flexed in his jaw, and he snapped it up from the table and shoved it under his arm.”

Jaw-dropping, eh? There’s lots and lots of that sort of stuff — that’s just the one that made me laugh the loudest — and it’s a pity, because there’s actually a jolly good little book here that needed just a little by way of professional attention to let it shine (or shin). I’m not quite sure why Messrs Bookouture (unless they’re a vanity imprint) didn’t give it that attention.

Even despite all these complaints, I enjoyed The Paris Secret. Guess I’d better tune into the Hallmark Channel tonight. With luck it’ll be something starring Alicia Witt, or maybe that hot, mystery-solving archaeologist . . . preferably both.