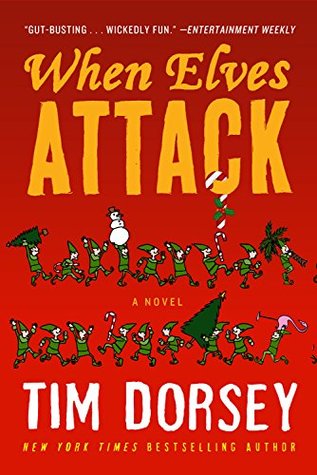 So the Providence Journal thinks Florida’s Tim Dorsey is “The undisputed king of the comic crime novel,” eh? Their reviewer might want to sample some Donald E. Westlake or, just within Florida, Carl Hiaasen and even Edna Buchanan. Okay, so Buchanan’s more a crime novelist with a splendid sense of humor than an out-and-out comedy crime writer, but I think the point still stands. Karen Kijewski, Kinky Friedman and even Janet Evanovich (even though I don’t personally get along with her work) might be worth a look too. I’m sure you can think of others . . . some of them doubtless blindingly obvious.

Whatever: back to this particular book.

I haven’t read any of the Serge Storm (as in storm serge; geddit?) novels before, and was startled to find this was #14 in the series — or really #13A, being a sort of half-length Christmas special.

Serge is a psychopath along the lines of the (far more somber) titular character in Bradley Denton’s Blackburn, a novel that should be required reading for every crime-fiction aficionado. Serge, like Blackburn, is a serial killer but one who chooses as his victims people without whom society will actually be better off — the kind of people who, while not necessarily criminal in any legal sense, in one way or another make life unpleasant for everyone around them.

In this book he and his dope-devouring sidekick Coleman celebrate a Florida Christmas in an inimitable way, by dressing up as Christmas elves — “wildcat elves,” as Serge describes the pair at one point — and doing their best to do good. Most but not all of their attempts to be seasonally benevolent end in mayhem and disaster, and there are a couple of murders along the way, but they mean well.

When Elves Attack is less of a novel than a collection of linked set-pieces, but to say that is no detraction. Back in my Encyclopedia of Fantasy days we used John Clute’s perhaps slightly graceless term “fixup” for novels cobbled together from pre-existing linked short stories. We never quite got round to devising a term to describe novels that make use of this structure — that have this same feel — even though in fact written as a single entity. Whatever the putative term might have been, you could apply it to When Elves Attack.

The real test of a book like this is whether it makes you laugh, and for me When Elves Attack passed with flying colors. I meant, as I toppled into bed last night, to read just a few chapters before switching the light out. In the event I read almost the entire book, and at such speed that it wasn’t all that late before the light went off. Partly this was because the novel’s fairly short, certainly so by today’s bloated standards, but mostly it was because I was having a ball, the only interruptions to the blur of the turning pages being the moments I was laughing too hard to see the print clearly.

Will I recall much about the book in a couple of weeks’ time? Quite possibly not. But I’m sure I’ll remember far longer how much fun I had with it, and I’ll be looking out for more of Dorsey’s work. In between the couple of Westlake’s Dortmunder novels I’ve yet to read, that is.