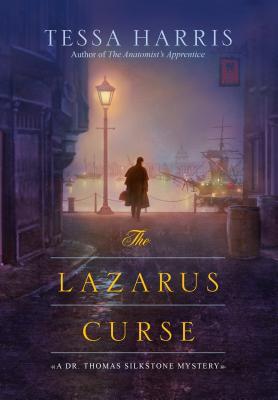 My first encounter with this series and, for reasons I’ll explain, my last.

It’s 1783 and the Royal Society’s latest expedition to the Caribbean (think “Voyage of the Beagle” but a few decades earlier and with a more limited scope) is returning with countless plant and animal specimens but not, alas, its two scientists; the only survivor of the scientific team is its illustrator, Matthew Bartlett. Soon, though, Bartlett disappears in suspicious circumstances, and a headless corpse found in the Thames seems to tell its own story. At the time of his disappearance Bartlett had with him the journal that the expedition’s principal scientist kept containing all his detailed notes on their findings.

What could have attracted the attentions of murderous badhats? We don’t have to wait long to find out. There have been rumors that the slaves in the Caribbean know of a concoction that puts people into a deathlike coma. When they’re revived with the antidote, their character has changed: they’re passive, amenable, obedient. In the wrong hands the Lazarus drug, so called, could be used to enslave the world, bwahahaha!

Okay, so we’re not talking plausibility here; but that’s all right.

Sir Joseph Banks, President of the Royal Society, drafts in young Dr. Thomas Silkstone — a Pennsylvanian anatomist living and working in London — to do the classification of the expedition’s specimens as best he can without those missing scientific notes. I’m not 100% certain why Banks should pick a medical man for the job over any of the qualified naturalists who were members of the Royal Society at the time and therefore on tap, so to speak, but there you go.

I’m also not 100% certain why the author tells us on page 11 that “While the backdrop to this novel is based on fact, all the characters are fictitious apart from Granville Sharp and Thomas Clarkson” when Banks, who plays a relatively prominent role here, was indubitably a genuine historical personage.

So Silkstone starts work on the specimens, although we see him doing almost none of this work. Instead he dives into an investigation of the murder of Bartlett and the underlying mystery of who might have organized the theft of that crucial scientific journal. Over the course of the novel he does surprisingly little actual detection — indeed, it’s more or less a lucky accident that finally offers up to him an explanation of what’s been going on — but instead finds himself confronting quite a lot concerning the slave trade, the brutality with which the North American colonists (who’ve recently become ex-colonists) treat the slaves, and the barbarous treatment of black people in England even after the official banishment of slavery there. Harris handles this material, some of it horrifying, very well; I’m not quite persuaded that an 18th-century white anatomist, however liberal his views, would have 21st-century sensibilities about race (remember that even 19th-century liberals like Darwin and Lincoln held views on the subject that we’d regard as appalling), but that implausibility is quite acceptable, I think, within the context of an historical novel.

And it’s as an historical novel that I think The Lazarus Curse should be judged. As I say, there’s very little detectiving going on (in that sense, the cover’s “A Dr. Thomas Silkstone Mystery” is borderline misleading) amid the splendid stuff on race and slavery and also a major subplot concerning Thomas’s lover — the widowed Lady Lydia Farrell — and her son. A good deal of the time I felt as if I were reading Charles Palliser Lite, although Harris isn’t as good a writer as Palliser, filling her text with annoying cutesy archaisms of vocabulary and syntax. (She’s not helped by some execrable copyediting.) Aside from reminding me that it’s about time I read another Palliser novel (I still have a couple to go), this comparison inclined me toward reading more of Tessa Harris’s work.

And then I got to the closing pages of The Lazarus Curse. I dislike cliffhanger endings to novels at the best of times because they seem to be a violation of the implicit contract that author and publisher are making with you when you buy a novel, that the tale you’re shelling out your hard-earned cash for is complete in itself. (There are certain allowable exceptions, as when you know you’re buying what’s effectively an episode of a longer tale.) Yet I cannot recall an instance of a cliffhanger ending infuriating me more than this one did.

All cliffhanger endings are mercenary and manipulative: the author is deploying the technique in an effort to make you want to buy the next book. That’s a given. But the one here transcends all bounds of acceptability. Just for starters, it’s a tack-on, reading as if someone had told the author it’d make commercial sense to end the book on a cliffhanger — say, what about throwing Lady Lydia into peril? — and so Harris scrabbled around for a way of doing this. What makes it even worse is that the relevant chapter invalidates entirely the preceding actions of one of the characters involved, Sir Montagu. There’s no explanation on offer as to why he should do a sudden volte face. Perhaps it’s all a cunning plan and those who read the next novel will discover it’s an elaborate bluff, or something . . . but this I’ll never know.