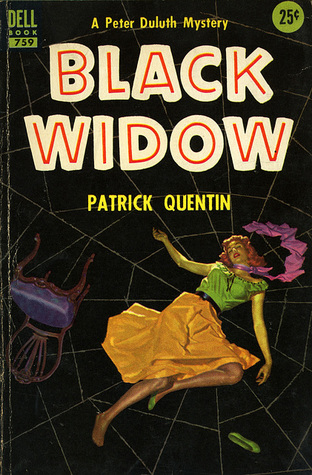 I first read many years ago, perhaps more than once, this classic novel of paranoia, gaslighting and what John Clute, when he and I were doing The Encyclopedia of Fantasytogether, christened godgaming — the process whereby a usually malicious person or group persuades another or others that a fictitious reality is what’s actually going on. (The godgaming type-novel is John Fowles’s The Magus.) More recently, in 2014, I watched Nunnally Johnson’s screen adaptation of it, Black Widow (1954), with the splendid Van Heflin as Peter, Ginger Rogers as Lottie, Gene Tierney impeccably cast as Iris and Peggy Ann Garner as Nanny Ordway.

Broadway producer Peter Duluth’s actress wife Iris is out of town for a while visiting her ailing mother. Peter is induced to go to a party held by their overweening upstairs neighbors, belle dame actress Lottie Marin and her subjugated husband Brian. There he meets Nanny Ordway, a young wannabe writer who seems like a fish out of water. Because he’s lonely and she’s broke and hungry, he takes her out for a burger. They see each other a few more times, always strictly platonically, and finally he lends her the key to the Duluth apartment so she can write there during the day, while he’s out, rather than try to do so in the dumpy Greenwich Village bedsit she shares with another girl.

It never dawns on him that others might regard his friendship with Nanny rather differently until, on Iris’s return, they go back to the apartment from the airport to find Nanny dangling from the chandelier in the master bedroom, having apparently hanged herself. Even then Peter doesn’t really recognize the hazard of his situation until it’s revealed that Nanny was both pregnant and murdered. Furthermore, everyone heard from Nanny’s own lips that she was engaged in a passionate affair with Peter . . .

In a way it’s a pity that whoever of the various partnerships who used the rubric “Patrick Quentin” chose to employ the series character Peter Duluth in the main role rather than making this a standalone, because there are times when it seems absolutely pellucid that, despite his innocence, Peter has no escape from the predicament that has so deftly been stitched around him — that he’s destined for the Big House or more likely the chair. Or perhaps it’ll prove to be the case that he’s been lying through his teeth to us, his readers? Of course, we know that neither of those can be the outcome because there are other Peter Duluth novels to come.

(He might lose Iris, though, as he almost did in A Puzzle for Fools, so there’s at least that level of uncertainty left.)

In the end everything’s neatly worked out, as we knew it would be, with Peter solving the bulk of the mystery himself only to discover that the NYPD’s Inspector Trant, whom he’s been regarding as a foe, has not only gotten there before him but also worked out the real truth, which is somewhat beyond the explanation that Peter achieved.

So far I haven’t come across a Patrick Quentin novel that doesn’t stand up well under rereading or, if being read afresh, hasn’t stood up well to the passage of time. The social attitudes in the books are, too, often surprisingly open for their day; in Black Widow, for example, the most intelligent and likable of the witnesses whom Peter interviews is a hatcheck girl/waitress, Anne, about whom he reflects that it’s purely because of the color of her skin that her existence is relatively so humble — a pleasingly human reaction in 1952 America, where the lynch mobs were still active.

I also liked the openness about sexuality. To be plain, there’s nothing remotely raunchy in the book, yet at the same time it’s manifest that intimacy plays an important role in Peter and Iris’s marriage, that extramarital sex is commonplace in their milieu, and that adultery, while frowned upon, is not necessarily some sort of precipice from which there’s no retreat — that it may even be, on rare occasion, morally acceptable. (I can’t go further into this issue for fear of spoilers.)

What also remains undated is the Patrick Quentin narrative style, which remained remarkably unchanged from one novel to the next despite any changes of writing personnel. Always completely under control, it has a kind of coolness of tone, a sense of objectivity that makes what are often the most dramatic of actions and emotional turbulences all the more affecting. Here I was completely involved in Peter’s emotional helterskelter as the noose seemed to be tightening around his neck, while also sympathizing fully with his plight: like I assume most of us, I’ve been in situations where outsiders have irritatingly misconstrued friendships as something else. Thank my lucky stars I’ve never encountered a Nanny Ordway in such circumstances, though!

Because it’s so very smoothly and elegantly written, and because it’s so engrossing, Black Widow, a short novel by today’s standards, is a remarkably quick read. In case you haven’t guessed, I think it’s spiffy.