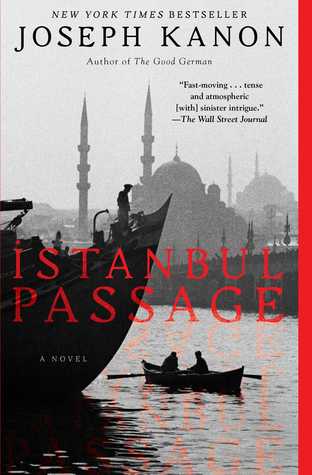 A couple of the reviews cited on the back cover of this novel compare Joseph Kanon’s work to the writings of Graham Greene. I’ve come across such comments before but, having read his Los Alamos (which I liked), Alibi (which I loved) and Stardust (of which I had the highest of expectations but which, alas, disappointed me), have always taken them with a pinch of salt. Now, having read, Istanbul Passage, I quite understand the comparisons’ point. There’s also some Eric Ambler here, while the tale is set in what could loosely be thought of as CASABLANCA (1942) territory.

World War II has just ended, and Istanbul, which as neutral territory has been serving as a sort of hub for the espionage activities of the Axis and the Allies these past few years, is trying to work out what its role in the world is going to be. US tobacco trader Leon Bauer, who during the war did occasional unpaid freelance jobs for his country’s covert intelligence services while also helping smuggle refugee Jews to safety, reluctantly agrees to take on one last little chore: meeting at the dock a defector from behind Russian lines and keeping him safe until he can be flown out to the US. Even though the defector, a Romanian nicknamed Alexei, proves to be a notorious Nazi butcher, Leon still feels duty bound to look after him.

Even as Alexei arrives at the dock, someone opens fire on them. Leon shoots back and hits his target. Next day comes the shock: the person he killed, the person who was trying to kill both Alexei and Leon, was the agent in the intelligence services who had served as Leon’s contact/controller there. Even more concerning, Leon is recruited to be the person who investigates the “murder.”

Leon isn’t quite an amateur at the espionage game, but he’s out of his depth as the professionals of the US, Russian and Turkish intelligence services, each with a different agenda, try to get to the root of things while also laying hands on Alexei. Then the agent the US has sent in from Ankara to investigate alongside Leon is murdered in the US consulate just after Leon has begun a torrid affair with the man’s wife . . .

There’s a heck of a lot more going on in Istanbul Passage than I could possibly outline even briefly here, but the above may give you some kind of gist of the content.

By and large, I was rapt by the novel, but this was despite some irritating tics in the writing. I can’t remember if this was true of the earlier novels of his I read, but here Kanon has a bad habit of using very terse, allusive prose (with, often, very short sentences). The trouble with using this sort of allusive style is that, if the reader doesn’t get the allusion, the narrative tends to fall apart a bit. On quite a few occasions while reading this book I came across instances where, after staring at a passage for far too long, I just had to accept that I really didn’t know what the hell the text was trying to tell me. On other occasions the staccato style was in itself irritating, interrupting what should have been a smooth flow.

Despite that major grouse, I became increasingly gripped by the book, very much caught up in its world — both the physical locale of postwar Istanbul and the environment of double- and triple-cross, the interplay of different countries’ interests. I was also engrossed by the love story between Leon and his new mistress, Kay — a love triangle really because, even though Leon’s wife Anna has been confined to an institute as a near vegetable for years now, he still adores her, and his memories of her.

It’s really a matter of chance that I read Istanbul Passage. I was sufficiently turned off by Kanon’s Stardust that I put Istanbul Passage — which I’d bought at the same time as Stardust on the basis of my enjoyment of Alibi — on the heap for transmission to a library sale at some point. For some reason it missed a few library-sale consignments, and the other day I noticed it still sitting there and thought, Why not? I’m very glad I took that gamble on it, and very grateful to blind chance for having retained the book in the house long enough for me to take the gamble.