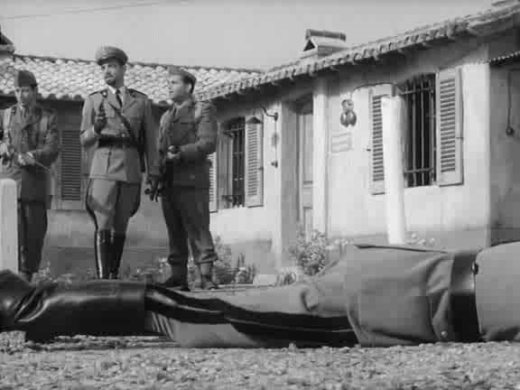 Michael Gilbert was among the great writers of mystery fiction, his most famous novel indubitably being his fourth, Smallbone Deceased (1950), one of those rare books that your correspondent has not only read more than once but makes time to read every few years as a not-so-guilty pleasure.

Most of Gilbert’s novels were set in standard detective-fiction territory. His two main series detectives were Chief Inspector Hazlerigg of the Yard and, later, Patrick Petrella of the Met. Late in life he broke the mold to write some historical detections, but the odd one out during his earlier career was his sixth novel, Death in Captivity (1952; vt The Danger Within), in which he drew upon his own experiences as a prisoner of war in Italy to set a mystery in a POW camp.

The movie adaptation, co-written by Bryan Forbes—best-known as director of such classic movies as site favorite Whistle Down the Wind (1961)[*]—chooses to focus on the POW angle of the story rather than on the mystery: by about the 40-minute mark we know who is betraying the inmates’ escape efforts to the Italians, and not so very much later we know who committed the “impossible” murder, and the mechanism of the “impossibility.” That said, a minor aspect of the mystery—how the traitor is effecting the betrayal—isn’t revealed until quite late on, so the movie does retain interest for purist puzzlers.

The scene is a POW camp for Allied troops in northern Italy. It’s Summer 1943. 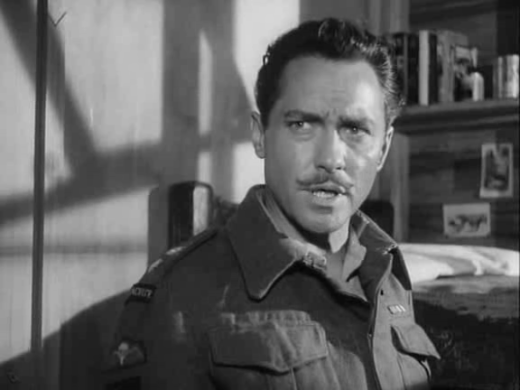 Despite the best efforts of the Escape Committee, headed by Lieutenant-Colonel David Baird MC (Todd), every escape attempt the prisoners mount is being thwarted at the last moment and usually lethally so, thanks to the sadism of the camp’s security officer, Capitano Benucci (Arne), nicknamed “Dracula” by the inmates because he’s a bloodsucker. It seems clear there’s an informant among the prisoners who’s secretly transmitting their plans to Benucci. But who? 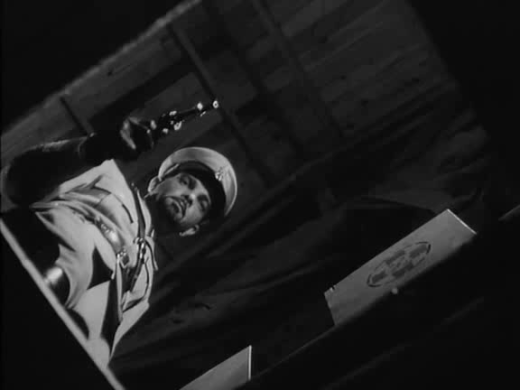 For essentially racist reasons, suspicion centers on Lieutenant Cyriakos Coutoules (Shaps), despite his protestations to the contrary. But then Coutoules turns up murdered, his corpse dumped in the depths of the tunnel the prisoners are digging from Hut C to the camp perimeter. Any number of people might have committed the murder in the belief they were performing a public service, but how on earth could they have gotten the body into Hut C and the tunnel beneath it without being spotted? 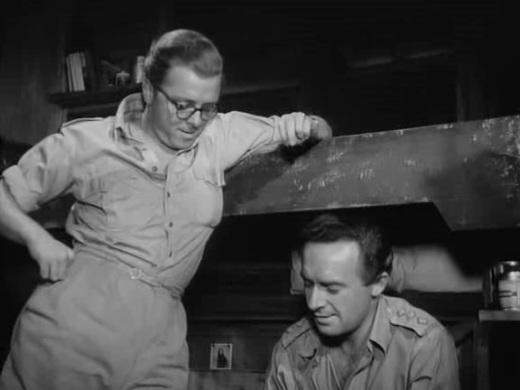 This is the question Captain “Bunter” Phillips (Attenborough) asks himself—and, for that matter, everyone else. He and his best mate, Captain Tony Long (Franklyn), are the stalwarts of the Hut C tunnel-diggers, so it’s reasonable their interest in solving the case should be the keenest.

Capitano Benucci, on a pretext, arrests Captain Roger Byfold (Houston), another close buddy of Bunter and Tony in the tunnel-digging effort, and proposes to execute him at an early opportunity.

There are other escape efforts underway within the camp. Major Charles Marquand (Wilding) and Captain Alfred Piker (Jones, best known as The Book in various incarnations of The Hitch-Hiker’s Guide to the Galaxy) have tapped the skills of enthusiastic amateur sewer-surfer Lieutenant Meynell (Stevens) to mount an escape of their own, and offer to take Byfold along with them.

But that effort too is scotched by Benucci and his men.

An irate Lieutenant-Colonel Huxley (Lee), senior officer among the prisoners, takes over the escape efforts and—with the grim news that the Italians are about to hand over the camp to the Nazis, after which who knows what might happen—proposes to mount an audacious scheme to evacuate the entire prisoner population under cover of the production of Hamlet the camp’s amateur dramatic society, led by Captain Rupert Callender (Price), is due to stage . . .

Phew! And that’s really just the setup for what’s an exceptionally ambitious scenario, deploying dozens of the great and the good among the British acting community of the period. Freeze the frame on any of the crowd scenes and you’ll spot—at least if you’re of a certain, ahem, vintage—numerous faces that are familiar even if, right at the moment, you can’t put a name to them. Among the uncredited throngs is the young Michael Caine.

Michael Whiting as Marquand (left) and Peter Jones as Piker.

Director Don Chaffey and his scripters use this large cast to build up a layered portrait of the POW camp and its daily life, so that it’s hard for us not to become immersed in it; when I finished watching the movie I had to shake my head a few times to return myself to my own, decades-later existence and remind myself my life wasn’t circumscribed by barbed wire and armed guards. 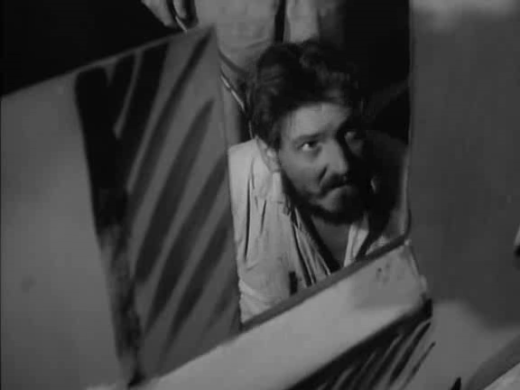 There’s plenty of humor amidst the grimness and claustrophobia. Some oddball characters among the prisoners have, by design, only a minor impact on the main plot yet add to the movie’s overwhelming sense of place. Andrew Faulds, later to achieve fame beyond the thespian sphere as the outspoken Labour MP for Smethwick, appears as naval Lieutenant-Commander “Dopey” Gibbon, who somehow manages to be a toper, despite all the camp’s limitations, swilling wine from the spout of a teapot. Terence Alexander, whose face is instantly recognizable from countless appearances, usually in comedies, plays Lieutenant Gibbs, a man who’s acquired a duck from somewhere and is constantly postponing his plans to sacrifice it to the pot. Steve Norbert is the accordion-playing Frenchman Lieutenant Pierre Dessin—indeed, it’s noticeable in Danger Within that, no matter the nationality of the various characters, they’re played, usually quite convincingly, by Brits. (The one notable exception is Dino Galvani, an Italian, in a very minor role as Benucci’s impotent boss, Commandante Arletti.)

Even though, as noted, Danger Within chooses to eschew its allegiances to the mystery genre, it works very effectively as a genre-blender: it’s a war movie that’s also a crime movie and a thriller. 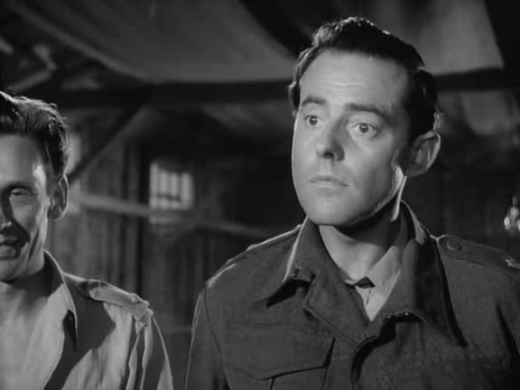 And it does thrill. The last half-hour or so, as we see Huxley’s ambitious—overambitious?—scheme being put into effect, with so many ways in which it could all go disastrously wrong, had me on the edge of my seat. The conventions of the POW movie dictate the scheme will be a success, but this is no guarantee that it’ll be an entire success and that all our favorite characters will survive to the closing credits. After all, we’ve already lost some seemingly central figures to Benucci’s thugs.

Danger Within, a wholly engrossing nailbiter with some pivotal performances from the denizens of a classic age of British cinema, is a movie that deserves to be far more widely known than it is.

[*] And I’m not alone in this. The entry on that movie is far and away the single most-visited post on this site.