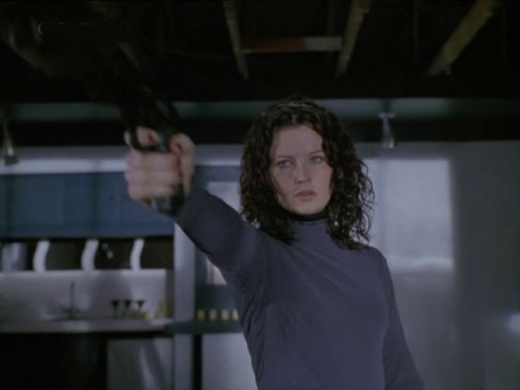 Years ago, the criminous Russian Karpov family—Peter (Foster), George (Mitchell), Natalya (Wynter) and patriarch Sergei (Lauter)—paused in their journey across Europe at the small Pyrenean vineyard of the Fauré family, where they murdered M. Fauré (uncredited), gang-raped and murdered Mme. Fauré (McGoohan) and left the Faurés’ adolescent daughter Brigit (Peterson) severely injured. Brigit was saved by the timely arrival of a neighbor, Renault (James, who is surely rocker Richard Thompson moonlighting; wrong accent, though).

Now the Karpovs live a life of organized crime in LA, which is where an older, harder Brigit (Fitzpatrick) has just arrived, athirst for vengeance. Renault is here already, and he fixes her up with weaponry, information and a boyish sidekick, Luc (Rhys). After casing the Karpovs’ nightclub, the hub of their criminal empire, the Blue Parrot, Brigit and Luc sweep into lethal action. 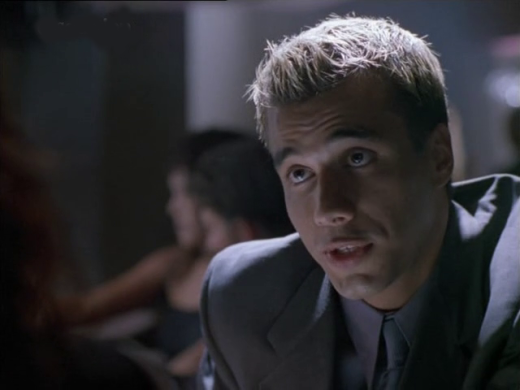 But they reckon without the rival crime family, the Reilly clan, headed by patriarch Michael (Culp) . . .

This is very selfconsciously an homage to classic film noir, complete with ostentatiously noirish camerawork—shadows, tilted shots, downshots and all—and even, in the early stages, a noirish voiceover; this latter is soon abandoned, perhaps because it sounds so bizarre mouthed in Brigit’s rather precious English tones. A great point is made at one stage of the fact that the movie showing on someone’s TV is Orson Welles’s The STRANGER (1946), from which we see a few clips. And then, of course, there’s the movie’s title, Farewell, My Love: a clear tribute to Raymond Chandler and the screen adaptations of his novel.* 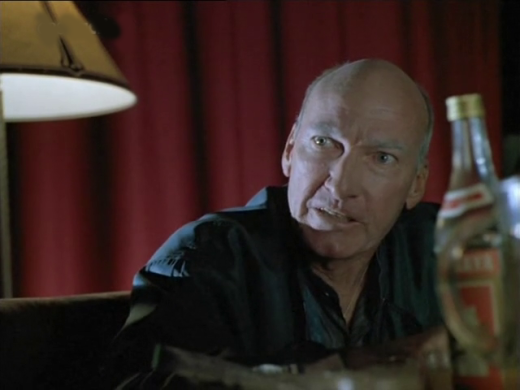 Despite a quality cast—aside from the actors I’ve mentioned, Adam Baldwin plays the Karpovs’ turncoat barman, Jimmy—the movie has “B-feature” written all over it; it appears to have been released first to UK television, then a few months later as a DTV in the US. That’s no criticism: many of the greatest films noirs were initially released as largely ignored B-features, becoming recognized as classics only much later.

Adam Baldwin as Jimmy the barman. 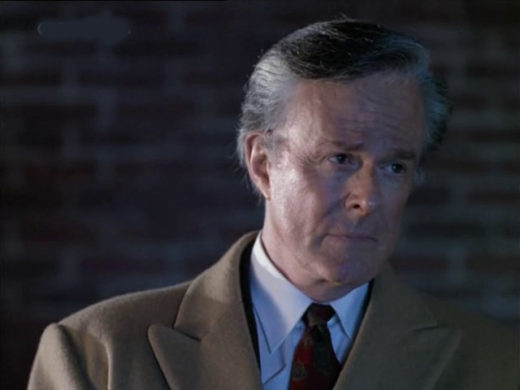 Where the movie succeeds par excellence is in making it absolutely clear that its casualties—at least of the good guys—have human consequences, ripples of grief that spread considerably farther than the killers could have conceived. So far as Sergei is concerned, the massacre of an unimportant French family years ago to save the cost of a few bottles of wine is something of zero significance and long forgotten—sort of like Justice Brett Kavanaugh and his drunken attempted rape of the teenaged Christine Blasey Ford. Sergei learns that his crimes of the past can’t be ignored; Kavanaugh, alas, has learned the opposite. 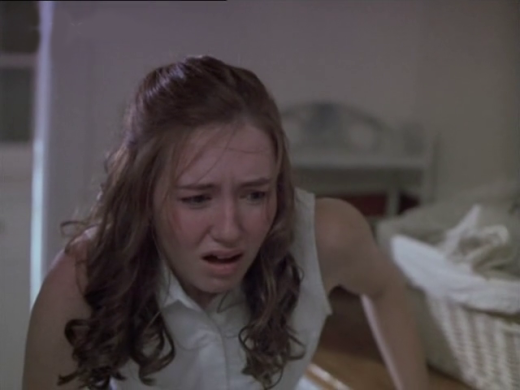 * The FALCON TAKES OVER (1942) dir Irving Reis, with George Sanders as The Falcon in lieu of Marlowe; MURDER, MY SWEET (1944; vt Farewell, My Lovely) dir Edward Dmytryk, with Dick Powell as Marlowe; and FAREWELL, MY LOVELY (1975) dir Dick Richards, with Robert Mitchum as Marlowe.