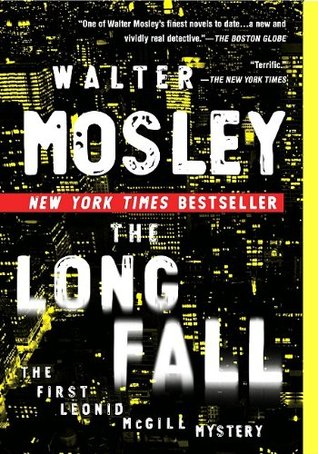 I’ve read a couple of Mosley’s Easy Rawlins books over the years — I loved Devil in a Blue Dress, which is the one just about everyone’s read, and quite enjoyed the other one, title now forgotten — so I was enticed when I tripped over a copy of The Long Fall by the prospect of a new Mosley detective, PI Leonid McGill, and a new Mosley setting, present-day New York.

And what a lucky discovery it has been. I’m not much of a one for series novels, but I may very well delve further into the Leonid McGill books, of which I see there are now five.

Leonid — “LT” to many of his acquaintances — has, in true Chandleresque fashion, three cases on the go. The main one involves tracking down four young men who, years ago, were friends of a youth who died by misadventure. No sooner has LT completed the chore and given the details to the Albany PI who hired him than two of the three surviving men are murdered and an attempt is made in prison on the life of the third.

Just a few years ago this wouldn’t have worried LT too much, but he’s recently decided to leave his unsavory past behind and try to be, well, a modern knight errant even though the streets down which he walks are mean. He resolves to find out who’s behind the killings and deliver them to the law or at least shut them down.

The Philip Marlowe comparisons are very obvious, and they extend also to the plotting, which, as it mixes the three cases together, is labyrinthine to the point that, so to speak, I still don’t know who murdered the chauffeur and why. (I did puzzle why one character was sometimes called Margaret, sometimes Lana, but decided not to let it worry me too much.) One difference from the Chandleresque template is that the three cases, although they overlap slightly in terms of the characters involved, don’t prove, down the line, to be all part of the same case. The other two — in which (a) a hood seeks an accountant with murder in mind and (b) LT aims to stop his charismatic teenage adoptive son, another rumpled knight, from knocking off someone who very much deserves to be knocked off — stay separate, although all three plot-strands resolve at roughly the same time.

The prose, on the other hand, reminded me more of Ross Macdonald than of Chandler. Actually, I think I preferred it to Macdonald’s. Besides, I think Mosley’s status is now such that we should be talking about other people’s prose being Mosleyesque . . .

Despite his squalid deeds in the past, LT comes across as a thoroughly likable, decent man in the present — somebody I would be glad to have as a friend. To be sure, some of the people he still mixes with are scumbags, but none of us can leave our pasts entirely behind. I enjoyed a great deal the time I spent in his company and, as noted, may very likely opt to spend more of it.