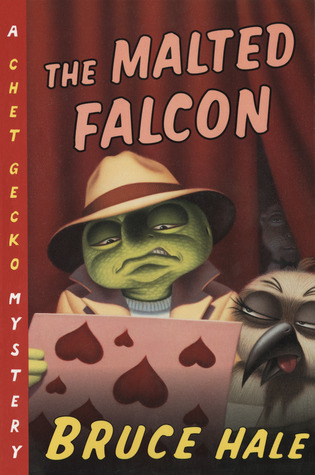 Chet Gecko, the rumpled PI of Emerson Hicky Elementary, solves a case involving a lost Valentine card and a stolen lottery ticket — the prize in question being a weekly serving of the Malted Falcon, the gooiest, biggest, stickiest dessert ever. With his trusty sidekick Natalie Attired in tow, Chet tracks down the bad guys and fights off his sugar cravings.

And did I mention that Chet’s a gecko — as the surname might suggest — while Natalie’s a mockingbird and all the other staff and students at Emerson Hicky Elementary are likewise talking animals?

The joy of this book lies less in the mystery, or even in the imaginative setting, than in the writing: this is Raymond Chandler done for ten-year-olds (like me), including the oh-so-naughty fart jokes conspicuous by their absence from the Marlowe novels. I lost count of all the great Chandleresque one-liners, so here’s just a single example:

In the shadow of the gymnasium, two cheerleaders swung a pair of jump [skipping] ropes. Two others skipped in and out and over in a pattern as complicated as a butterfly’s bloomers.

This is Vol. #7 in a fifteen-strong series, but the first I’ve encountered; a normally quite sober crime-fiction blogger was raving about it. I grabbed the book because of the irresistible title (although, I confess, at first I thought it might be an allusion to Scotch — even more irresistible). I rattled through it in an hour or so (it’s very short), grinned a lot at the Chandlerisms, frowned at the fact that there’s no artist credit for the rather good line illustrations.

Any decent children’s library should have a bunch of books from this series, so you’ve really no excuse for not giving it a try. If need be, tell the librarian you’re borrowing the book for your nephew.