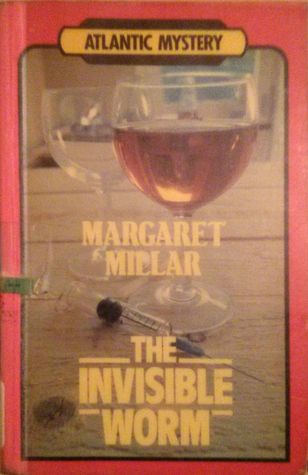 Margaret Millar’s first published novel — and the opening salvo of her three-novel Paul Prye series — is a traditional mystery of the Agatha Christie/Ngaio Marsh variety, set in what’s to all intents and purposes a country house whose guests form a neatly constrained group of suspects. Prye, a fey detective of the Philo Vance variety (though not quite that irritating!), is a consultant psychiatrist with the bad habit of quoting stanzas from the works of William Blake at appropriate and inappropriate moments.

In this instance the first victim is the highly successful blackmailer Thomas Philips, found dead of a hyoscine injection on the grand staircase of the Hays household, one of the more chichi properties of a chichi Chicago suburb.

These are the questions investigating cop Inspector William Bailey must ask himself as he digs for clues among the house’s occupants — the Hays family and their guests. It seems to Bailey that all of them have something to hide, even consulting psychiatrist Paul Prye, here for a few weeks to assess the mental condition of Barbara Hays, wife of spluttering paterfamilias George Hays. In between the perfectly natural impulse (shared by this reader, at least) to slap Prye upside the head for all the bloody Blake quotations, Bailey can’t decide whether to regard the man as his prime suspect or accept his offers of help in the solution of the case. In the end he does the latter while keeping the former in mind as an option.

There are more murders over the next few days, the last of them being a particularly harsh one in that the victim most certainly didn’t deserve the fate, so you could hardly call this a stereotypical cozy. The novel’s mixture of laugh-aloud comedy and cruel criminality put me in mind of Ngaio Marsh, several of whose novels I’ve read recently. I was still in the first chapter of The Invisible Worm by the time I’d guffawed uproariously for the second time, so, even though the novel didn’t manage to keep up quite this hit-rate throughout, by any standards it was successful on the comedy front.

I was less convinced by it as a mystery. It struck me, as I read Vance’s Prye’s long explanation at the end of how, through a process of elimination, he had identified the killer, that he could, with very little adjustment, have used a similar line of reasoning to finger more than one of the other relevant characters: his solution wasn’t quite arbitrary, but it had the odor of arbitrariness lingering around it.

So: An enjoyable, entertaining read but not one that, had I come across it as by L.K. Midglett (or whoever), I’d have regarded as likely to prefigure a career so distinguished as Millar’s would turn out to be. Although the novel bears several of the hallmarks of her later work, notably the wit and the deftness of characterization, clearly here in this fledgling flight she was just warily testing her wings.

There’s a lengthy and very useful review of The Invisible Worm by Curtis Evans here.

I read this novel as part of the fairly recently published omnibus The First Detectives , the opening volume of a hugely ambitious project from Soho Press, reprinting the entirety of Millar’s work in a matching set of six omnibuses and a memoir. (The print’s kind of small and there are more typos than I’d prefer, but it’s a handsome volume nonetheless.) I’m planning to read the omnibus’s remaining four novels (two more Paul Prye mysteries, two Inspector Sands mysteries) over the next few days, but we’ll see how it goes.