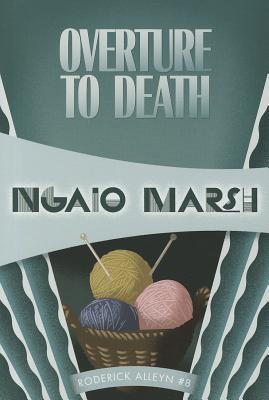 Just as amateur pianist Miss Campanula strikes the third chord of the overture to a new village play, a shot rings out and she slumps dead across the keys. Closer examination reveals the piano was boobytrapped: a cunning arrangement of pulleys within meant that, the first time someone pressed the “soft” pedal, a cord would pull the trigger of an internally mounted Colt automatic pistol.

But who could have wanted Miss Campanula dead? Just to complicate matters, was Miss Campanula really the intended victim? After all, until mere minutes before, Miss Campanula’s bosom friend and bitter rival, Miss Prentice, was the designated pianist; it was only thanks to the influence of the vicar that Miss Prentice abruptly conceded the honor because of a septic finger.

Enter Chief Inspector Roderick Alleyn and his trusty sidekick, Inspector Fox, drafted in from the Yard because the local rozzers are tied up handling the latest exploit of a serial burglar gang.

The cast of suspects seems easily whittlable down to the seven people involved in the presentation of the play — eight, if you count Miss Campanula herself, who might feasibly have chosen to boobytrap her piano as a particularly macabre means of suicide. Slowly and painstakingly, Alleyn and his team tease out the truth . . .

After reading Marsh’s 1953 romp Spinsters in Jeopardy , it was refreshing, even although I enjoyed that book a great deal, to turn to one of her more traditionally formed mystery stories. Most of the book is taken up with Alleyn’s investigation, which might have become a tad longwinded had it not been for Marsh’s prose, laced as it is with numerous of her trademark good jokes and shrewd observations of village life and human foibles. The revelation of the murderer came as no great surprise — not because it was obvious whodunnit but simply because, by the novel’s latter stages, any one of several of the suspects could have been revealed as the guilty party without my raising an eyebrow. Leaving that aside, the denouement was perfectly satisfying — as it should be in a good Golden Age ‘tec.

I know some people have difficulty with Ngaio Marsh’s fiction as a whole, but I’m not one of them. This isn’t a particularly outstanding example of her work — more like beans on toast than smoked salmon — but it did for me exactly what it set out to do: provide good, solid enjoyment for a few hours.

I read Overture to Death as the third of the three novels in a Ngaio Marsh omnibus that Little, Brown issued in 1978, presumably for a bookclub. Yes, I know that datum’s completely irrelevant.