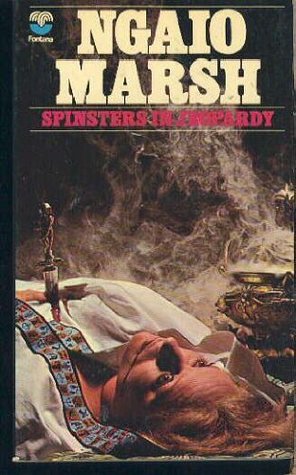 For once not a mystery from Marsh but a ripping yarn — a ripping yarn about cults, drug trafficking, muddled identities and general derring-do. There’s a mystery element in the tale, to be sure, but it very much takes the back seat in what’s otherwise a romp.

The Yard’s Roderick Alleyn is being lent to the Sûreté to help nail an international drug-trafficking gang operating out of the Alpes Maritimes. Since he’s going to be based not far from where a cousin of Troy’s lives — a cousin she’s never met but with whom she’s corresponded — it seems like a good idea to take Troy and six-year-old Ricky along so as to mix business with something of a vacation.

The first sign that this plan might not work out too well comes when their train is approaching its destination. Peering out into the early-morning gloom, Alleyn sees, through the lighted window of a chateau next to the tracks, what looks like a murder being committed. Turns out that’s the very chateau his bosses are hoping he’ll be able to infiltrate, because it’s the HQ of a seedy cult linked to the drugs gang.

That’s coincidence number one. Coincidence number two — the sudden taking-ill of a fellow passenger on the train — is enough to gain Alleyn the kind of entree to the chateau, and the cult, that he could have only dreamed of. I’m normally not too much of a fan of coincidence-driven plotting, but the ones here seem just on the right side of the plausible/risible boundary: if these two coincidences happened in real life we’d remark on them with interest, but we wouldn’t be completely flabbergasted.

Another part of the plotting that might trouble some minds arises because, quite clearly, Marsh knew nothing about the effects of marijuana: she seems to have thought they were much the same as those of, say, cocaine and heroin. The glue that keeps the cult together is that its leaders take pains to get the acolytes addicted to reefers, and one of those acolytes talks about how her habit has come completely to control her actions — she’ll do anything for the next fix of marijuana, in other words. To which all one can say is: Yeah, right.

As with the coincidences, this doesn’t really matter. If we assume the cult leader has spiked the reefers with something harder, then the rest fits in well enough. Besides, this is an adventure romp we’re reading, not John le Carré.

There’s a lot of Marsh’s trademark humor here; I laughed aloud several times. Aside from the occasional urge to smack the precocious young Ricky upside the head, I rollicked through Spinsters in Jeopardy with a grin on my face, even during the occasional moments of high tension.