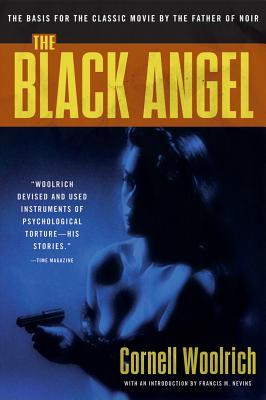 This novel’s 1946 movie adaptation, The BLACK ANGEL dir Roy William Neill, is one of my favorite B-noirs; it offers what’s arguably Dan Duryea’s finest hour, and on top of that you have June Vincent, Peter Lorre, Broderick Crawford, Constance Dowling and Marion Martin. The story is also one of noir’s cleverest; its denouement comes right out of left field, and is really quite moving. For this reason, and because I was uncertain if I had ever read a Woolrich novel (I’ve read plenty of his short stories), I was quite eager to read The Black Angel.

I discovered that the movie really took no more than the bare bones of the plot — a woman’s husband is convicted of the murder of his floozie, and the wronged wife must race against time to prove his innocence — before inventively taking the story in quite different directions. The trouble is that most of the things I like best about the movie, including the performances by Duryea and Vincent, are as a consequence of those “quite different directions.”

But let’s now stick to the book.

Alberta French Murray knows that husband Kirk is innocent of killing chanteuse Mia Mercer because she reached Mercer’s apartment before he did and Mercer was already dead by then. The quirks of the judicial system rule out her giving evidence of this in court. After Kirk has been convicted, Alberta realizes she seized Mercer’s address book in her panic, and still has it. A clue that she found in the dead woman’s apartment has made her believe the killer’s initial was “M”; there are four entries on the book’s “M” page aside from that for Alberta’s husband, Kirk Murray, so off Alberta goes on four investigations that she hopes will reveal the murderer.

The bulk of the book is devoted to those four investigations. While each is interesting enough in itself, the structure of the narrative strongly reminded me of those novels that John Clute christened “coupon fantasies”: the protagonist has to pick up various plot coupons (the sword of Brothenswiper, the Gray Grimoire of the Dells, the Key Parlous, etc.) in order to get to the end of the book (or trilogy), where at the last moment he saves the world from Chaos and wins the babe. Here, it’s as if Woolrich had four novellas that weren’t going anywhere, so he recast them slightly, added a few links, and: Bingo! Something that looks like a novel.

As a consequence of this and of some pretty egregious overegging of the literary pudding, I found much of the middle portions of the novel a slog. Alberta’s first investigation, which leads her to the dead woman’s tragically degraded husband, generates some real pathos, which helps, and is overall a pretty good piece of work; but the second is vastly overwritten and very obviously has virtually nothing to do with the rest of the book save Alberta’s presence. I found the third segment to be, fortunately, more interesting and, by the time it segued into the fourth, I was at last becoming gripped by the story. The last fifty pages or more went by in a bit of a blur, but I felt I’d had to work harder than I should to get to that helterskelter finale.

So, for me, the jury is still out on Woolrich. I feel rather the same way about the novels of Philip K. Dick, another author whose fictions have spawned innumerable good movies. Obviously Woolrich is a hugely significant figure in the history of crime fiction, especially noirish fiction, so I’m sure to try more of his work in the future. And there’s plenty to choose from, of course.