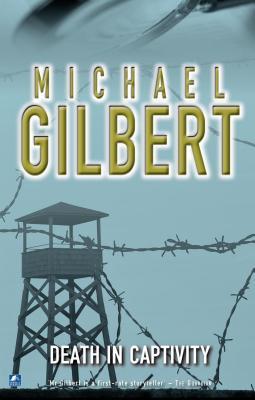 I watched the splendid movie based on this novel a few days ago, Danger Within (1959), dir Don Chaffey and featuring a galaxy of British stars (all male); my discussion of it will be posted here on Noirish in January or February and, when it is, I’ll pop back here and add the link. Watching the movie made me realize it had been far too long since I’d read me some Michael Gilbert — his Smallbone Deceased is a guilty pleasure that I’ve read ever decade or so since my late teens, and the other mystery novels of his that I’ve read have never failed to entertain me.

It’s toward the end of World War II. Inside a POW camp in Italy, the captives — almost exclusively British officers — are whiling away their tedious incarceration in various ways, many of them by plotting escape. Their most hopeful venture is the expertly hidden tunnel that starts below Hut C; so far as they know, the Italians have had no idea of its existence during the long months of its construction.

One day a Greek prisoner whom the Escape Committee has suspected of being an informer disappears, and hours later the Hut C diggers discover his corpse buried in an earthfall at the end of their tunnel. How could it have got there? The jury’s out on whether he was murdered but, if he was, this is a locked-room mystery with a vengeance.

One of the diggers, “Cuckoo” Goyles, is deputed to be the detective whouncovers (so to speak) the truth of the matter, and ASAP. Meanwhile, the digging must continue even as events in the world outside the camp are creating an additional, very threatening deadline for Goyles’s investigation.

As time goes on, it seems evident there’s still an informer among the prisoners, one who’s delivering the information on all their plans into the hands of Benucci, the sadistic Fascist/Nazi in charge of policing the camp. Who could this turncoat be? Now Goyles has two mysteries to solve, not just the one.

The movie focuses on the POW aspects of the tale, and makes quite a few changes to the plot accordingly (such as revealing the solution to one of the mysteries early on), whereas the book is far more a piece of detective fiction that happens to have an unusual setting, a setting that governs a lot of the characters’ actions and motivations. (The setting is authentic: Gilbert was himself a POW in Italy.) If I were asked to say which of the two I preferred, all I’d be able to reply is that they’re both excellent: they’re different enough from each other that it’d be silly to play them off against each other. The novel offers a richer experience, I’d say, but that’s not unexpected, while there’s some quite splendid invention in the movie.

It’s no real spoiler to say that there’s an escape: obviously there is. Although the murder/locked-room element of the tale has been solved by then, Goyles decides to keep the solution of the other strand of the mystery to himself. The book’s later chapters detail the trek across Italy toward Allied lines of some of the escapees before Goyles reveals the truth. That concluding section, which I found very reminiscent of Eric Newby’s memoir Love and War in the Apennines, is enjoyable enough but, I’d say, overlong. That’s my sole complaint about the novel, which otherwise held me rapt.

So, two admirable artefacts born of Michael Gilbert’s wartime experiences. Which to do — read the novel or watch the movie?

4 thoughts on “book: Death in Captivity (1952; vt The Danger Within) by Michael Gilbert”