En route to Australia during the early years of WWII, the SS Bombay is to stop at the prison island of Caruba in order to let the prison’s governor, Merrill Hammond (Howard), disembark. Among the other passengers aboard are: 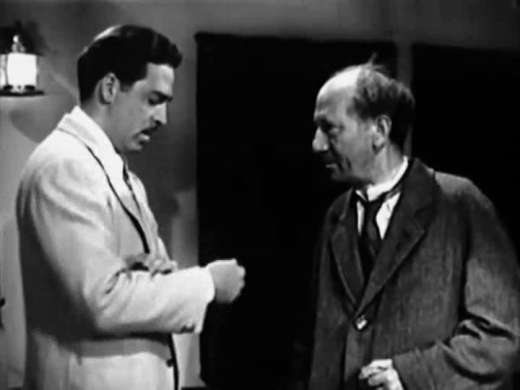 That night the ship is attacked by a Japanese bomber but, thanks to fog, is unscathed. The only casualty is Heller, who was sitting up topside when the Japanese strafed the deck with machine-gun fire. Even so, there’s been time for some humor. As Merrill drools over Diana, the ship’s captain (Eldredge) remarks to the steward (Chandler), “Steward, tell the mate to keep a good lookout. Looks like we’ll have a man overboard.”

The next day Merrill installs Diana in the bungalow that years ago he built for himself and his wife; alas, the wife succumbed to Caruba’s climate within months. Diana’s tended by the manservant Sani (played as a caricature Asian by Havier, following Hollywood’s depressing practice in those days). That night she’s joined for dinner by:

You may be getting the impression that this short movie has a superfluity of cast, and you’d be right. It’s astonishing how often this is true of the Monogram zero-budget quickies and their counterparts on the other side of the Atlantic, the Merton Park fillers.

After dinner, Diana entertains the men at the piano—it’s tempting to say she plays the musical instrument like a body. Suddenly she breaks off as she sees, spying on her through the darkened window, Prisoner #129, Curtis (Roland). When he’s caught by her dinner companions, both he and Diana claim to know nothing of each other, but it’s obvious to us—and to Kent—that they’re lying. In reality, as it doesn’t take long for us to discover, he’s her husband, Thomas “Dan” Bentley, sentenced to ten years for a murder in Europe that he swears he didn’t commit. Diana has managed to track him down and cleverly engineer it, by appropriate batting of her pretty blue eyes, that Merrill should invite her ashore. 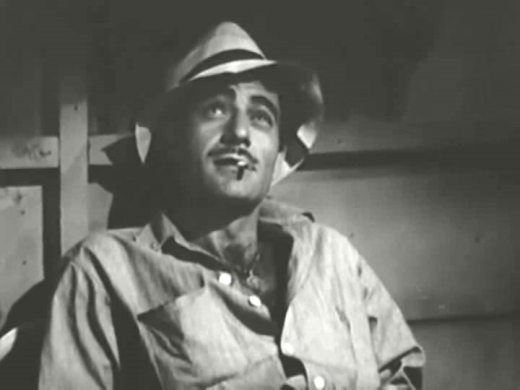 Dan (Gilbert Roland) relaxes while around him prisoners brawl.

At a later rendezvous, even though it’s clear she’s troubled by Dan’s violence of speech and more, she gives Dan all the money she has, plus her jewelry, and promises to help him escape aboard a tramp steamer, the Mariposa, due to dock briefly at the island in two days’ time to pick up a consignment of copra and with whose skipper, Sanchez (Adams), Dan has somehow managed—yea, even from the depths of his island prison—to come to an agreement.

The first time he clapped eyes on her, it was plain that Doc Brown was mightily smitten with Diana:

Doc: “I work hard, and every night I dream of beautiful woman—hundreds of them.”
Diana [entering]: “Good evening.”
Doc: “Heaven help me. I’m beginning to see them now even when I’m awake . . . and they talk to me.” 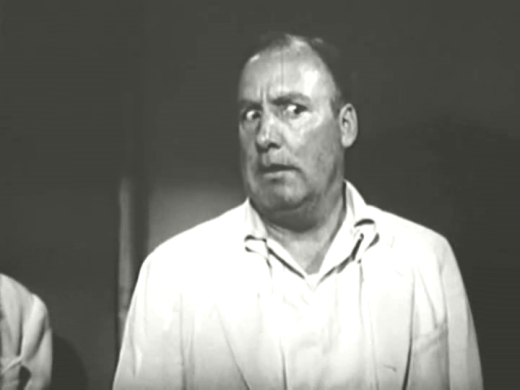 Doc Brown (Alan Mowbray) gets a first glimpse of Diana.

Doc and his nurse, Pauline (O’Neil), are coping not just with the usual injuries and ailments of the prisoners but also with an outbreak of typhus that has claimed a number of lives.

Doc: “I’m so pickled in alcohol that I’d kill a typhus bug if he came within six feet of me. But I can’t let Nurse Pauline die. She’d go to heaven and I’d never see her again.”

Diana dreams up a scheme whereby she can play upon Doc’s affections to persuade him to claim Dan has died of typhus and issue a death certificate for him. This Doc duly does, and—even as Kent is going frantic that all the new and damning information about Diana and Dan that he’s receiving via cables from various parts of the globe is being ignored—the besotted Merrill turns a blind eye to the conspiracy. But, before the planned departure of the Mariposa, Diana comes across Dan’s records and discovers that it’s not his prison experience that has hardened him, as she thought, but that he’s been a total bastard all along: among his many crimes is that his marriage to her is bigamous . . . 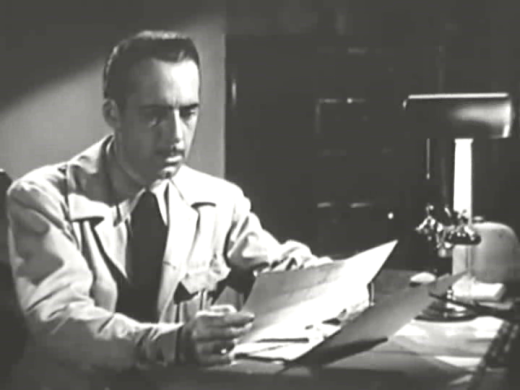 Like so many of the Monogram cheapies, this is really quite entertaining despite its demand that you strive mightily to keep your disbelief suspended. Diana’s plan to come to the island is clearly cockamamie—how often do male prison governors invite pretty women to come spend a vacation on the premises, no matter how enamored they are?—and Dan’s scheme to get away is even more rickety; it depends, for example, on the money Diana brings to Caruba even though Dan couldn’t have known beforehand that Diana was coming. It’s beyond credibility that Doc Brown, no matter how much of a sot he is, would connive in the issuing of the false death certificate (unless Diana might offer him a far greater reward than just a few words of gratitude), and likewise that Merrill would simply let one of his charges escape. I haven’t been able to lay hands on a copy of the play, so I have no idea if these plot holes were imported from the original or introduced as “improvements” by the screenwriters. 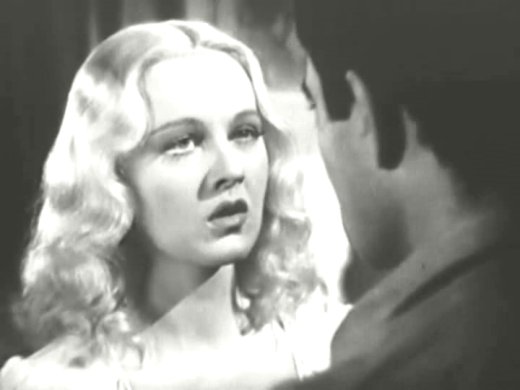 Diana (Helen Gilbert) explains to Dan that her feelings have changed.

This was more or less the pinnacle of Helen Gilbert’s screen achievements; a couple of years later her part in Meet Me in St. Louis (1944) went uncredited. Between 1936 and 1952 she married at least six times; at least four of those marriages ended in divorce, the shortest-lived of them all being that to the gangster Johnny Stompanato, which lasted merely from February to July 1949. Stompanato was of course the thug whose violent relationship with Lana Turner ended in 1958 when Turner’s daughter, Cheryl Crane, fatally stabbed him. Gilbert’s screen career petered out in the mid-1950s, although she lived until the (reasonably) ripe old age of 80, dying in 1995.