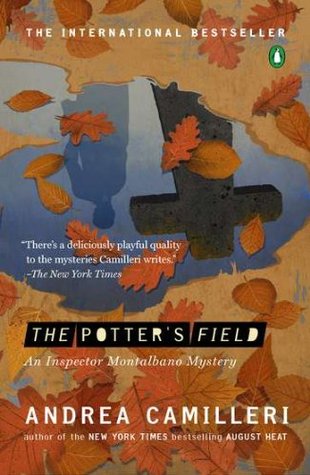 I’ve read perhaps half a dozen of Camilleri’s Montalbano novels before and generally enjoyed them, but for much of the time while reading this one I felt as if the author was rather doing things by numbers. Yes, Montalbano’s dimwit junior Catarella mangles the language and makes a fool of himself, complete with pratfall. Yes, a media figure unfairly lambasts Montalbano and gets his comeuppance. Yes, there’s a good measure of clowning around. The trouble was that, while much of this was going on, I was rolling my eyes and wishing Camilleri would get a move on with the actual, you know, story.

The owner of a field of clay that’s “harvested” for sale to potters discovers someone’s dumped on his property a big black plastic filled with the bits of a dismembered human body — thirty bits, to be precise. That figure reminds Montalbano of the tale of Judas and his pieces of silver, as does the fact that the grisly relic was found on, literally, a potter’s field. The symbolism involved makes him suspect this must be a Mafia killing: the unidentified victim must surely have been someone the hoodlums regarded as a traitor — a Judas.

Distracting his attention is the case of the car that deliberately almost ran over a beautiful pedestrian before speeding off. Another distraction is that his assistant Mimi Augello, who married just last year and has recently become a father, seems to have embarked on a passionate, obsessive affair . . .

As you’ll guess, all of these strands prove to be part of the same rope. The body is that of the seafaring husband of a Colombian immigre so beautiful that her mere presence makes men trip over their own feet. Somehow Montalbano must ignore the messages his body is telling him whenever Dolores is nearby and bring his ratiocinative powers to bear on an infernally complex case.

The book really gets moving in its second act, when Camilleri sets aside all the clowning that has marred the first half and gets down to the actual investigation. To be sure, there are still some moments of broad humor — I especially liked the description of the havoc Dolores’s arrival caused when she visited Montalbano at the police station — but they’re much funnier because interlarded with more cerebral stuff. There’s plenty of the social commentary about Sicily and its corruption that we’ve come to expect from this author. And the unraveling of the case, when we get there, is a real doozy.

So: my least favorite of the Montalbanos I’ve read, but still a solid piece of entertainment whose latter half I devoured at a great rate of knots.