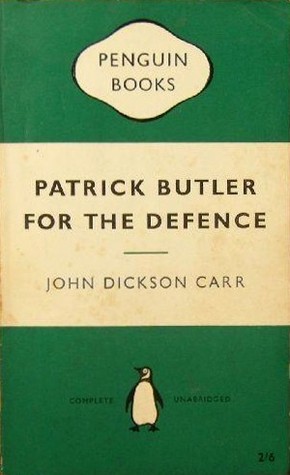 I was reading one of Curtis Evans’s excellently illuminating essays at The Passing Tramp the other day and noticed that he dismissed Patrick Butler for the Defence as among Carr’s relatively few stinkers:

Carr returned to the present with regrettable results. He brings back the odious Patrick Butler, one of those modern-day Carr characters who postures intolerably as if he’s stepped out of the seventeenth century, and throws in some of his most exasperating women, all of whom parade around in a miracle problem plot adulterated with extraneous matter.

I’ve come across similar comments elsewhere, and they’ve always rather puzzled me, because I’ve recalled thoroughly enjoying this novel. Mind you, as I mentioned to Curt in the comments, the last (and only) time I’d read the book was in the mid-1980s. He replied that it had been a long while since he’d read the book, too, and that he perhaps ought to give it a reread to see if his views had changed at all in the interim. This seemed good advice for me as well. Mirabile dictu, I was able to find my ancient battered Green Penguin, and down I sat.

And yet again I thoroughly enjoyed the book. It’s a great romp — a cross between a locked-room mystery, a thriller and a bedroom farce. I laughed quite a lot, at both the situations and the one-liners.

Young lawyer Hugh Prentice is just about to knock off for the night when a Middle-Easterner, Abu of Ispahan, barges into his office demanding to talk about how he’s been swindled by someone associated with Hugh’s firm. Hugh tells him he has an urgent errand — he has to drop a brief off to barrister Patrick Butler — but will deal with Abu’s concerns immediately on his return.

But Hugh has barely left the room before Abu is murdered, stabbed through the heart with Hugh’s own paperknife. Since the office door was in full view of both Hugh and his close friend and colleague Jim Vaughan the whole time, we have here what’s essentially a locked-room murder — and a locked-room murder for which Hugh is the obvious suspect.

So he goes on the lam, enlisting the aid of Patrick Butler, whose qualification as a useful ally is that he once assisted Dr. Gideon Fell, Carr’s series detective. Together with Hugh’s fiancee Helen, Butler’s current flame Lady Pamela de Saxemund — a seeming airhead with a penchant for strangulating her vowels — and the dead man’s ungrieving widow, the red-hot illusionist Cecile, the pair solve the mystery and unveil not one but two rogues.

Butler is a curious figure: essentially, a massive ego on two legs. He considers himself God’s gift to women, and he switches his Irish accent off and on in irritating fashion. Yet he’s also intelligent, courageous, good-hearted and a steadfast friend. On the face of it, his treatment of (attractive) women is pretty despicably sexist, even for 1956 — we first encounter him immediately after he’s smacked Lady Pamela on the derriere — yet if we look just a little bit deeper we find that really he’s subverting society’s prevalent attitudes toward women. Adult women were supposed, all too often, to be demure, submissive, intellectually unsullied little virgins who’d never say boo to a goose. Butler, by contrast, has far more respect for women who’re actually adult, who’ve been around the block a few times — like Cecile and, it proves, Lady Pamela, who’s been forced into a straitjacket of artificiality by her parents but eventually breaks free. To many readers in 1956 these attitudes would have been bracingly progressive. (I can’t go into his feelings toward Helen here for fear of giving too much away.)

Butler’s other attitudes complement this. He clearly detests society’s hypocrisies and the hypocrites themselves, and fittingly it’s two such who are finally unveiled as the villains of the piece. Although, with his cod Irish accent and his overweening self-praise, he’s a sort of bagful of artifice himself, he’s impatient with artifice in others. All in all, then, he’s the kind of person you’d be glad to count as a friend even if you spent some — or quite a lot — of the time wanting to punch him on the nose.

The other complex character here whose company I enjoyed was Lady Pamela, who starts out hardly as a character at all but as the most paper-thin stereotype, yet shows herself to be a thoroughly admirable individual.

The solution to the locked-room mystery, when it comes, is far from one of Carr’s best. Butler gives good evidence as to the identity of the murderer but, when it comes to the mechanism, is far less convincing: he explains how the murder could have been done rather than demonstrating beyond doubt how it was done. (Gideon Fell, in his pomp, would have harrumphed and then demolished Butler’s explanation in favor of his own, watertight one.) And the novel stops very abruptly, as if Carr suddenly decided he couldn’t be bothered writing the final chapter that would have neatly tied off all the other plot strands (the Thank You and Goodnight chapter, to borrow a friend’s term).

So I can understand why some people come away from the novel with a vague feeling of dissatisfaction — of coitus interruptus, so to speak. But for me, well, by then I’d enjoyed myself so very thoroughly reading the novel that I was perfectly prepared to forgive the damp-squibbishness of its finale.

So, a stinker or not? I’d say very decidedly not. It’s by no means one of Carr’s greats, but it’s a highly entertaining outing — a romp, as I said above — that leaves the reader with a little to think about. This is Carr having hijinx, and there’s nothing wrong with that.

11 thoughts on “book: Patrick Butler for the Defence (1956) by John Dickson Carr”